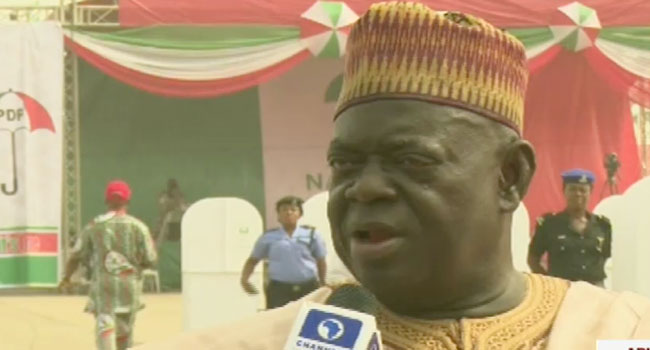 The national convention of the Peoples Democratic Party (PDP) is ongoing at the Eagles Square in Abuja with delegates and members of the party in attendance.

Speaking to Channels Television’s correspondent before the commencement of the programme, a Chieftain of the party and former Niger State Governor, Mr Babangida Aliyu explains why the convention is holding amid tight security.

“We are very security conscious and accreditation has to be done properly so that we do not have those that should not be in here to come in. That is what we have been doing. If you notice, the place is so organised, there is no usual chaos that you have with conventions. So that is the reason for the delay a little so that the security will be carried out properly,” he said.

The former governor explained that tight security was necessary based on advice by foreign countries of a security threat in Nigeria, most especially in the nation’s capital.

“If you recall, we were advised by some foreign countries about the security threat in Abuja. So that is why we are very careful but I believe we should be starting soon,” Aliyu said on Saturday.

He said further that whoever emerges as the Chairman of the party will be recognized by every member of the party.

Meanwhile, party faithful are saddled with the responsibility of electing executives that will pilot its affairs for the next four years.

Former President Goodluck Jonathan has earlier expressed believe towards the success of the convention. Speaking earlier this week in Rivers State during a visit to the governor, Nyesom Wike, he said that the PDP will wax stronger and become solid after the convention.

Jonathan, while speaking on Monday said that an elected National Working Committee will set in motion the preparation for the 2019 General Elections adding that this will solidify the party’s reemergence.

His comment was confirmed by Mr Wike on Friday where he told Nigerians to expect a better party whose quest is to claim power come 2019.

Wike, who served as Minister of State for Education during the Jonathan presidency stated this when he appeared on Channels Television’s Sunrise Daily programme.

The governor also expressed confidence that the convention will produce a viable opposition that will overthrow the ruling All Progressives Congress (APC) when Nigerians go to polls in 2019.