By Emmanuel Aziken, Abdulsalam Muhammad & Dirisu Yakubu
KANO—Moved by the outpouring of affection from the people of Kano State at the beginning of a two-day official visit, President Muhammadu Buhari, yesterday, vowed to overwhelm any opposition to his undeclared 2019 re-election prospects.

The President’s assertion, coming a week after he hinted in Abidjan, Ivory Coast, of the possibility of seeking re-election, has put the camp of possible presidential hopefuls in the ruling All Progressives Congress, APC, in palpable confusion.

Among the prospective APC chieftains believed to be waiting in the wings on Buhari’s intentions are Senate President, Bukola Saraki; Senator Rabiu Kwankwanso and Governor Aminu Tambuwal, all of who have denied any presidential aspiration in the meantime.

Senator Kwankwaso, the immediate past governor of Kano State, who came second in the contest for the 2015 presidential ticket of the APC, was not in town for the first presidential visit to his home state, yesterday.

Kwankwaso, who is enmeshed in an increasingly ugly political conflict with his hand-picked successor, Umaru Ganduje, was said to have travelled to Egypt, purportedly to settle the fees of some Kano State-sponsored students in that country.

Comrade Aminu Abdulsalam, who served as Kwankwanso’s commissioner for inter-governmental affairs, told Vanguard, last night, that the former governor and his associates were not invited for the functions relating to the President’s visit.

Senator Saraki on his part, had last week, affirmed on the sidelines of the launch of a book written by his political disciple, Bolaji Abdullahi, that his political outlook on 2019 would not be made known before next February.

Governor Aminu Tambuwal, who had contemplated a presidential run in 2014 before settling for the governorship of his home state, said in an interview published in Vanguard last Monday that 2019 was still a long way off.

President Buhari first gave an indication that he would contest the 2019 presidential election when he met with the Nigerian community in Abidjan, Ivory Coast, last week.

Eight days after that hint, Buhari who had run four presidential campaigns, again let slip the possibility of another campaign when emotion came over him at the sights and sounds of the enthusiastic Kano crowd that welcomed him to the Emir’s Palace. 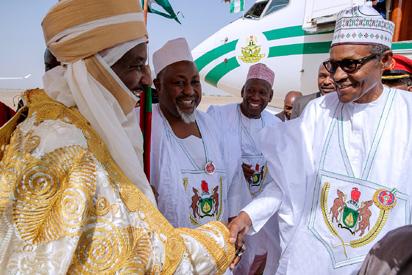 “I’m overwhelmed by the sea of heads I see, and by what I see today, if elections are contested, I have no doubt I will  win it,” he said at the palace which was the first port of call as soon as he arrived Kano.

Reacting, yesterday, to the president’s seeming inclination, Peoples Democratic Party, PDP, spokesman, Prince Dayo Adeyeye said: “The crowd that supposedly welcomed President Muhammadu Buhari is not a reflection of what will happen in 2019. Make no mistake about it.

“Governments come and go all over the world. For the President to continue to blame the PDP for his failure to perform almost three years into his mandate, shows how ill-prepared he is for the leadership of this great country.

“They were not elected to blame but to serve the people. What project have they commissioned since they came into power? Nigerians are aware of what the PDP was able to do but can we say the same thing of the APC?”

The president, who was received by Emir Muhammad Sanusi II, said he was determined to do the needful, even as he called for patience on the fact that there is a difference between a military regime and a democratic administration.

He was accompanied by his host, Governor Ganduje, Governor Badaru Abubakar of Jigawa State and the deputy governor of Zamfara State, Alhaji Ibrahim Wakala.

Buhari said:  “When I was military head of state, I arrested many people and jailed them for alleged corruption and in the end, I also ended in jail.

“Since I joined politics in 2003, I contested for president three times but I could not get it right until the fourth attempt in 2015.

He lamented that from 1999 to 2014, Nigeria earned so much money which, according to him, was frittered by preceding administrations.

“The country’s wealth was squandered by those that ruled the nation at that period of time due to corruption and when we came, we said things must change for the better,” the President said.

Buhari, however, assured that his administration will not relent in its people-oriented projects.

“We are determined to better the life of our people,” he stated, as he commended the Kano Emirate which he said consistently supported him in all the public offices he occupied.

“I am commending this royal house, for there was nothing I became without consulting the royal house.

“I was a governor, a Minister, Head of State and now the President of the Federal Republic of Nigeria. But in all that I did, I was making consultations with this Emirate Council. I must, therefore, acknowledge and commend the house,” he said.

Following the courtesy call, President Buhari visited the Central Prison, Kurmawa, where he pardoned 500 inmates and made provisions for transport fares to take them back to their places of abode.

Buhari urged the ex-convicts to be of sound character, and live a healthy life devoid of crime and criminality.

He subsequently commissioned the multi-billion naira Specialist Hospital, Giginyu, named after him.

On that occasion, the President enjoined other governors to emulate Dr. Ganduje’s efforts in the health sector.

He said: “Other governors should emulate the good work of Governor Ganduje for fulfilling his campaign promises. We must be happy that he is making bold steps to bring development to his people.

“I am also calling on the workers to make good use of the facilities in accordance with best practices.

“I must commend the administration of Dr Abdullahi Umar Ganduje for taking development and healthcare to the grassroots.”

Muhammadu Buhari Specialist Hospital and Paediatric Hospital, Zoo Road were projects first initiated by Ibrahim Shekarau’s administration who governed the state between 2003 and 2011.