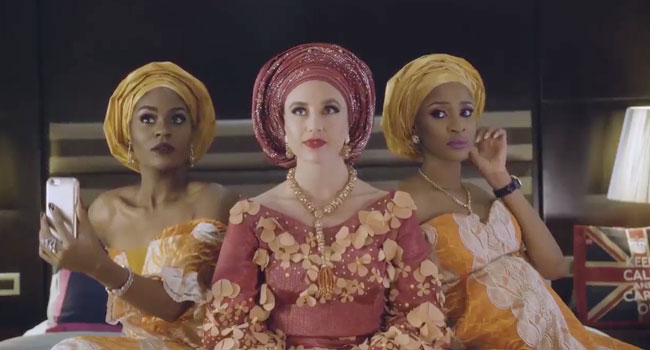 About a year after the movie, the Wedding Party shattered the Nigerian box-office, the Producers return with a sequel ‘Wedding Party’ Two.

The Executive Producer, Mo Abudu believes that the movie addresses serious issues. Speaking with Channels Television, during the screening in Lagos on Thursday, she said the movie can compete with any other movie across countries.

“It is a very serious movie dealing with serious issues. We see Sola Sobowale crying. You can imagine the work of the Director to get her to be that emotional. It is a very big movie. This film can sit shoulder to shoulder, anywhere in the world,” she said.

The Director of part one, Kemi Adetiba passed on the directorial duties to Niyi Akinmolayan for this second instalment. Living up to the standards already set by the wedding party one, Akinmolayan admits, it comes with a bit of pressure.

The storyline relegated the lead characters from the first installment to the background and focused on support casts Nonso Onwuka and Deardre Winston played by Enyinna Nwigwe and Daniella Down.

Tinuade Coker, played by Sola Sobowale became the sensation of the Wedding Party, and the ace up Niyi Akinmolayan’s sleeves is to replicate that sensation in another character chosing South-African actor, Michael De-pinna.

Banky W and wife Adesua Etomi announced their engagement on the set of the Wedding Party 2 in Dubai and ever since this announcement, they have dominated the news tabloids. Banky who is still finding his footings in the acting world where he has forayed from music had to rely on some of the experiences of his cast mates to deliver under pressure.

Another forayer from the music industry is rapper Ikechukwu whose character, Sola enjoyed more prominence as well Harrison a character played by Frank Donga.

The film closes with Sola appearing to have found love causing many to suspect it is a foundation for a third installment.

After months of anticipation, The Wedding Party 2, shot in Lagos and Dubai will hit the big screens this Christmas season in every film theatre across Nigeria.