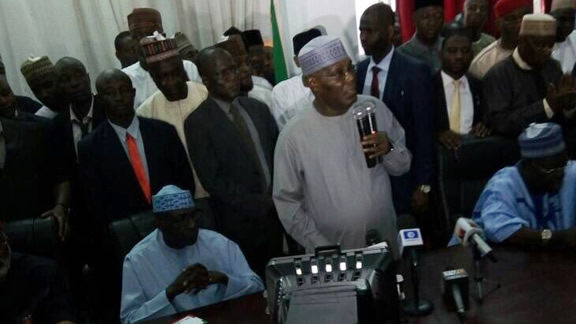 Former Vice President Atiku Abubakar has asked politicians who defected from the Peoples Democratic Party to other parties to return.

He said there “is no other political party” in the country apart from the PDP.

Atiku spoke in Abuja on Tuesday when he paid a courtesy call on the national leadership of the party at its national secretariat in Abuja.

The former Vice-President had resigned his membership of the All Progressives Congress about a week ago without joining any other political party.

But on Sunday, he announced that he had returned to the PDP, which he left in 2014 with others to form the APC.

While leaving the PDP then, he had said that the APC would be his “last bus stop”, vowing never to return to the former ruling party.

Accompanied by his loyalists and praise signers,  Atiku who had never hidden his desire to be the President of Nigeria, swallowed his words as he heaped praises on the Senator Ahmed Makarfi-led National Caretaker Committee of the PDP for remaining steadfast.

He said he was very grateful to the leadership of the party for granting him the opportunity to visit the party despite the tight schedule of its leaders.

He said, “I like to thank you very much indeed for this privilege and opportunity granted me to do so, realising that this is a very busy for you.

“All what I have come to do today is to come and show my face. Many people have read in the media that I have returned home. This is home.

“Mr. Chairman, I want to congratulate you for a wonderful work which you have been doing to redeem the image of this party, to return it, rebrand it and return it to its original form.

“I want to assure you of my support and cooperation at all times, to make sure that these objectives are achieved by you and subsequently by your successors.”