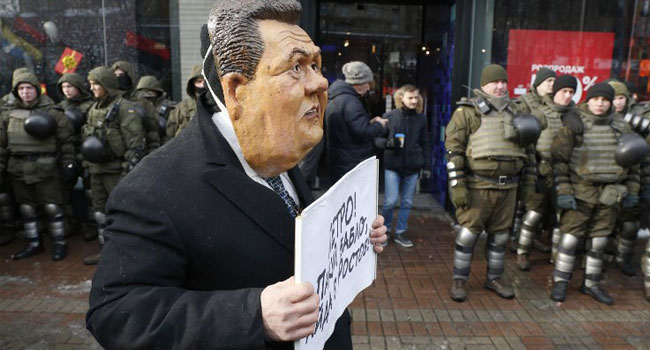 Ukrainian prosecutors on Monday sought house arrest for former Georgian president Mikheil Saakashvili, who is accused by the Ukrainian authorities of trying to stage a coup sponsored by Russia.

Saakashvili, under investigation for his alleged cooperation with Russia-linked “criminal groups”, has denounced his prosecution as an attempt to remove him from public activities.

Supported by a number of Ukrainian lawmakers in the courtroom and several hundred protesters gathered outside the court, Saakashvili called the trial “a shame” of current authorities that has inspired critical media coverage.

“Look at the Western press, they gone crazy!”, he said emotionally.

“One terrible article after another is the shame of Ukraine,” he added.

“Putin is winning, he is laughing, he is roaring with laughter,” Saakashvili said, ridiculing the concept that he and Russian authorities could possibly be plotting together.

Ukrainian prosecutors allege that Saakashvili cooperated with allies of former Ukraine president Viktor Yanukovych, currently in hiding in Russia, and took money from the Russians.

Saakashvili, 49, entered Ukrainian politics after serving as president of Georgia following the Georgian “Rose Revolution” he spearheaded in 2003.

A pariah of the Kremlin after fighting a short war with Russia in 2008, Saakashvili was a vocal champion of the three-month uprising in Kiev that toppled the Moscow-backed Yanukovych government in 2014 and turned Ukraine towards a pro-EU course.

Ukrainian President Petro Poroshenko rewarded Saakashvili for his efforts by appointing him governor of the important Black Sea region of Odessa in 2015 before the two men fell out and his Ukrainian passport was annulled.

He was arrested last week in Kiev after an attempt to detain him earlier dramatically failed when supporters swarmed the van where he was being held.

Saakashvili has gone on hunger strike to protest the “false accusations” against him.

He is also wanted in his native Georgia for alleged abuse of power.