By James Agberebi: Already qualified Manchester City suffered their first defeat in all competitions this season following their 2-1 away defeat to Shakhtar Donetsk in Group F of the UEFA Champions League on Wednesday.

Two first half goals from Bernard and Ismaily in the 26th and 32nd minutes put Shakhtar in the driving seat.

In the 90th minute Sergio Aguero scored a consolation goal from the penalty spot to end the game 2-1.

A hat-trick from Philippe Coutinho (penalty 4th, 15th, 50th minutes), a brace from Sadio Mane (47th, 76th minutes) and a goal each from Emre Can (sixth minute) and Mohamed Salah (86th minute) completed the rout for Liverpool.

Egypt forward is the top scoring Premier League player in all competitions this season with 18 goals.

The second position in Group E went to Sevilla thanks to their 1-1 away draw against Maribor.

Holders Real Madrid edged Borussia Dortmund to a 3-2 win at the Santiago Bernabeu in Group H.

Madrid raced to a 2-0 lead with goals from Borja Mayoral and Cristiano Ronaldo in the eighth and 12th minutes respectively.

Ronaldo’s goal meant he became the first player in Champions League history to score in all six group stage matches in one season.
Dortmund were back on level terms through Pierre-Emerick Aubameyang’s brace on 43 and 49 minutes. 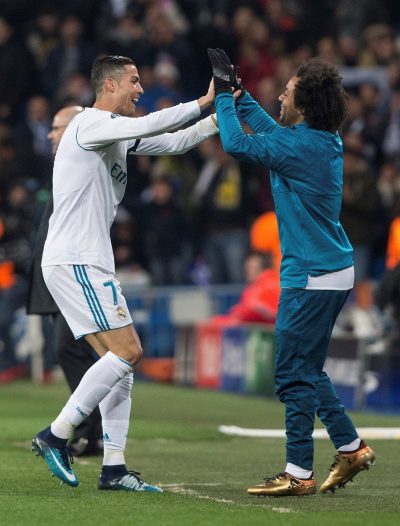 But it was Madrid that had the last laugh with Lucas Vazquez netting the winning goal on 81 minutes.

And in Group G, FC Porto joined leaders Besiktas into the next round following their 5-2 home win against AS Monaco.