By Johnny Edward:
Nigeria star Victor Moses made his second UEFA Champions League start for Chelsea this season as the Blues were held a 1-1 draw at home to Atletico Madrid in Tuesday night’s encounter at Stamford Bridge.

Saul Niguez’s header in the 56th minute gave the Spanish side the lead in the encounter but a deflected shot from Eden Hazard in the second half earned Chelsea their second draw of the competition.

The game was Moses’ sixth appearance in the UCL since making his debut in the competition during the 2012/2013 season with the Blues.

In the group’s game, Diego Perotti’s goal against Qarabag in Rome sent AS Roma through to the next round with a 1-0 as group winners courtesy of a better head to head record than Chelsea.

In Group A, Manchester United and Basel advanced to the next round of the competition with victories on Tuesday night.

At Old Trafford, Manchester United finished as group winners after the Red Devils came from a goal down to beat CSKA Moscow 2-1.

Alan Dzagoev scored the opener CSKA Moscow in the death of the first half but second half strikes from Romelu Lukaku and Marcus Rashford ensured Manchester United’s unbeaten home record in the European competition was extended to 21 games.

Nigerian strikerAaron Samuel was an unused substitute for CSKA Moscow in the encounter.

Basel defeated Benfica 2-0 to join Manchester United who will be playing in the round of 16 for the first time since 2013/14 season. Mohamed Elyounoussi and Dimitri Oberlin were on target for Basel.

In Group B, Super Eagles forward Henry Onyekuru was impressive in his fourth start for Anderlecht who crashed out of the UCL despite defeating Celtic 1-0 thanks to an own goal from Jozo Simunovic. Onyekuru was on for the entire match. 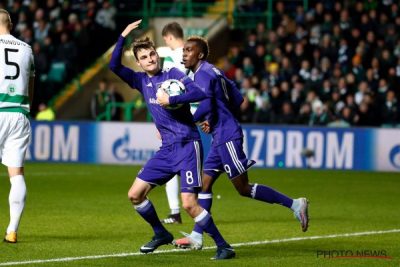 In the other group game, Bayern Munich avenged their opening day defeat to Paris Saint Germain in the competition with a 3-1 win at the Allianz Arena.

Goals from Robert Lewandowski and Corentin Tolisso in the first half gave the German champions a deserved lead into the break.

Five minutes into the second half, Kylian Mbappe pulled one back for the Parisiens but Tolisso restore Bayern’s two goal advantage in the 70th minute.

Both teams are through to the round of 16 of the UEFA Champions League but PSG finished as group leaders while Scottish champions Celtic dropped to the UEFA Europa League despite the defeat. 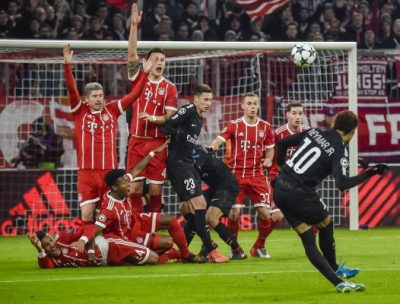 Group D saw Italian champions Juventus join Barcelona in the next round of the competition after they recorded a 1-0 win over Olympiacos who did not feature Emmanuel Emenike in their match day squad.

At the Camp Nou, second half goals from Francisco Alcacer and Jeremy Mathieu sealed a 2-0 win for Barcelona at the expense of Sporting CP.

RESULTS FROM MATCH DAY SIX OF THE UEFA CHAMPIONS LEAGUE