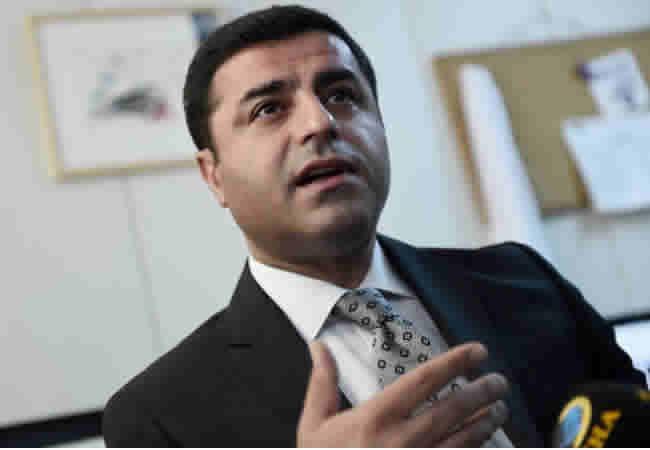 Turkey’s pro-Kurdish opposition party leader goes on trial in Ankara on Thursday over alleged links to Kurdish militants, after spending more than a year behind bars in a case his supporters say is politically motivated.

Selahattin Demirtas, co-chairman of the Peoples’ Democratic Party, was first detained in November last year in a crackdown under the state of emergency that followed 2016’s failed coup.

Before his arrest Demirtas was considered one of President Recep Tayyip Erdogan’s major rivals, a silky orator who has succeeded in bringing his party from the fringe into the political mainstream.

The HDP co-leader, 44, is charged with “managing a terror organisation”, “making propaganda for a terror group”, “inciting criminal acts” and more. He faces up to 142 years in prison if convicted.

Demirtas — who is being held in prison in the northwestern region of Edirne, well away from his Kurdish heartland — is not expected to appear in the first hearing of his trial in Ankara.

The HDP has denounced a letter it claimed the justice ministry sent to all courts prosecuting Demirtas, telling them not to allow the charismatic leader to appear in court.

A dozen HDP MPs were detained at the same time as Demirtas, including former co-chairwoman Figen Yuksekdag. She was stripped of her MP status in February and stepped down as co-party leader in May.

Nine HDP MPs are still in prison, including Demirtas and Yuksekdag.

Under Demirtas’ leadership, the HDP took seats in the Turkish parliament as the second biggest opposition party, winning support from liberal and left-wing Turks beyond its Kurdish base.

But the government accuses the party of being a political front for the outlawed Kurdistan Workers’ Party, a group blacklisted by Turkey and its Western allies.

Analysts say Demirtas never succeeded in fully distancing his party from the PKK, though the HDP denies the claims.

It has rubbished Ankara’s accusations against its co-leader, saying Demirtas’ 501-page indictment was mostly made up of press releases, speeches, panels and similar legal and political activities.

Demirtas is ensnared in nearly 100 legal cases, but this is the most serious and the one for which he has been held in prison for almost 400 days.

The party claimed the accusations were “prepared for political reasons, not legal ones” because they date back to events between 2011 and 2013 yet the HDP said the preparation was done in the first four months of 2016.

Further infuriating the HDP, the computer which contained Demirtas’ defence for the hearing was stolen in the southeastern province of Diyarbakir.

Renowned US intellectual and linguist Noam Chomsky was among authors and politicians who signed a petition this week calling for Demirtas and Yuksekdag to be released.

While in prison, former human rights lawyer Demirtas has written poetry, produced artwork, tweeted through a third party and even written a selection of short stories entitled “Seher” (“Dawn” in Turkish).

The book’s publisher Dipnot told AFP it had printed 155,000 copies of the book which was now in its 15th print run.

After June 2015 legislative elections which the HDP hailed as a triumph, the two-year ceasefire between the PKK and the Turkish state fell apart and intense fighting resumed.

More than 40,000 people have been killed since the PKK launched its insurgency against Turkey in 1984.

Less than a year after the 2015 poll, parliament voted to lift MPs’ immunity from prosecution, paving the way for the arrest of HDP lawmakers.

Since the government imposed a state of emergency after the July 2016 failed coup, tens of thousands of people have been arrested over alleged links to the putsch. Government critics and Kurdish activists have also been targeted.

The HDP has been hit hard with 11,500 officials, members and party sympathisers detained since the end of the ceasefire, while 4,537 have been formally arrested. (AFP)