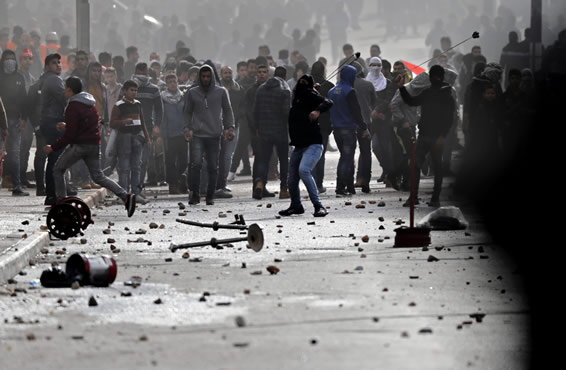 US President Donald Trump’s recognition of Jerusalem as Israel’s capital sparked Palestinian protests, clashes and a call for a new intifada on Thursday as fears grew of fresh bloodshed in the region.

Trump’s announcement also prompted an almost universal diplomatic backlash that continued on Thursday, with fresh warnings from Turkey, the European Union and Russia.

Israeli Prime Minister Benjamin Netanyahu however lavished praise on Trump, saying his name would now be associated with Jerusalem’s long history and urging other countries to follow his lead.

The Israeli military deployed hundreds more troops to the occupied West Bank amid uncertainty over the fallout, while clashes between Palestinians and Israeli security forces erupted in various areas.

In a speech in Gaza City, Hamas leader Ismail Haniya called for a new intifada, or uprising.

Protests were held in West Bank cities including Ramallah, Hebron and Nablus, as well as in the Gaza Strip.

Israeli forces dispersed several hundred protesters with tear gas at a checkpoint at the entrance to Ramallah, while the Palestinian Red Crescent reported dozens wounded from tear gas, rubber bullets and live fire in the West Bank.

Three Palestinians were wounded east of the city of Khan Yunis in the Gaza Strip, medical sources and witnesses said.

Trump’s defiant move — making good on a pledge made during his 2016 presidential campaign — ends seven decades of US ambiguity on the status of the Holy City, which is claimed by both Israelis and Palestinians.

Trump said it marks the start of a “new approach” to solving the Israeli-Palestinian conflict.

“It is time to officially recognise Jerusalem as the capital of Israel,” he said in a speech from the White House on Wednesday, urging calm and “the voices of tolerance to prevail over the purveyors of hate.”

But his willingness to part with international consensus on such a sensitive issue drew increasingly urgent warnings from around the world.

Russia said it viewed the move with “serious concern” and Saudi Arabia called it “unjustified and irresponsible.”

Turkish President Recep Tayyip Erdogan said it would put the region in a “ring of fire.”

“What kind of approach is this? Political leaders do not stir things up, they seek to make peace.”

Palestinian leaders were outraged, with president Mahmud Abbas saying Trump had disqualified the United States from its traditional role as peace broker in the Middle East conflict.

Palestinian shops in east Jerusalem, including the Old City, as well as in the West Bank were largely shuttered and schools closed on Thursday after a general strike was called.

“By this decision, America became a very small country, like any small country in the world, like Micronesia,” Salah Zuhikeh, 55, told AFP in Jerusalem’s Old City.

“America was a great country for us and everyone.”

Trump’s move left many angry US allies struggling to find a diplomatic response.

Through gritted teeth, Britain described the move as “unhelpful” and France called it “regrettable.” Germany said plainly that it “does not support” Trump’s decision.

Eight countries including Britain, France and Italy pressed for an emergency meeting of the UN Security Council in response, which was set for Friday.