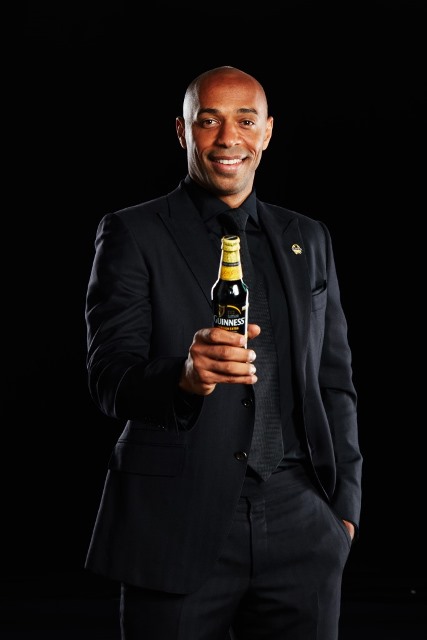 In a first for Nigeria, Guinness is delighted to announce that Made of Black ambassador, Thierry Henry, will be visiting Lagos on 17th-18th December as part of the Guinness Made of Black programme.  Look out for his special message to Nigerians ahead of his visit on the Guinness Nigeria Facebook page @GuinnessNGR

During his time in Nigeria, the international football icon will meet winners of the ‘Be a Front Row Fan’ consumer promotion, which is currently running across the country.  He will join them to watch the West Brom v Manchester United EPL game at Landmark event centre Victoria Island and celebrate their passion for football and their Made of Black spirit in the ultimate viewing centre event. He will also officially unveil Nigeria’s brand new Made of Black brand ambassador and join well known names at an exclusive Nigerians Made of Black celebration event.

If you would like to be in with a chance of meeting Thierry Henry in December, look out for special promotional bottles of Guinness in your favourite bar and SMS the code under the crown to 1759 for a chance to win. Instant win prizes of cash and airtime are also up for grabs. Participants must be over legal purchase age (18+).

Adenike Adebola, Marketing Director Guinness Nigeria Plc said, “Thierry Henry is a great example of someone with Made of Black spirit.  He is best known for his time at Premier League club, Arsenal where he achieved a number of accolades. But his early days there were challenging.  No goals in his first eight games left people questioning the record transfer fee.  But he had the confidence in his ability and was determined to show people what he was made of.  Henry carved his own path to bring his creative flair to the game, he worked hard to demonstrate and his skill and ability; ultimately changing the way the game was played in England and showing that he was truly Made of More.”

Guinness embodies the Made of Black mind set.  It is an iconic beer that has the darkest liquid, but the brightest flavours.  A beer that has lived in the hearts and minds of millions in Africa and across the world for over 250 years but has always had the authenticity, boldness and vision to do things differently.