It was an evening of fun, entertainment and networking as Tenstrings Music Institute in Lagos gathered top celebrities in the media and the entertainment industry in an interactive and entertaining meet recently. 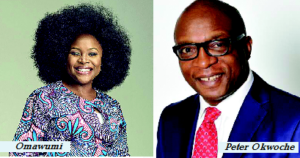 The programme laced with music, comedic performances and awards for outstanding personalities in the industry, is an annual event in its second running called Music meets Media, held at the Institute’s Lekki Phase 1 main campus.

It had in attendance, special guests comprising Peter Okwoche of the BBC TV/Radio –Focus on Africa programme, Olisa Adibua of the Beat 99.9FM, Lagos among others. In the music sector was one of Nigeria’s celebrated songstresses, Omawumi, alongside Paul IK Dairo, Eva Alordia and others, while others from the entertainment industry on ground were the legendry DJ Jimmy Jatt, Gbenga Adeyinka 1, and a whole lot of other DJs and upcoming standup comedians. Not left out were upcoming musicians and a new crop of young artistes studying music at the institute.

Peter Okwoche is a recipient of an award in the media category. He was rewarded for his outstanding performances in broadcasting media, while the songstress, Omawumi bagged the best outstanding music act in Nigeria for her relentless efforts in  using music to propagate peace and awareness on some social issues in the country.

During the interactive session, both awardees were put on the hot seat where they revealed their career journeys through life, challenges and how they were able to make it. For Peter, who has been in the media industry for over 25 years,  he started journalism professionally from Benue Radio and went straight to  the British Broadcasting Corporation, BBC, London. “It was a journey that started with a strong passion for the media,” Okwoche said. His days in school at the University of Jos, Plateau State where he was a member of young music group called the Boy Band had inspired his choice of career.

For Omawumi: “Music lives in me and that’s why I started music early enough. I currently do not produce songs, rather I am involved in total music production that revolves around stage performance with a band.I also produce songs for others. After a great success in the industry, I feel it’s right to give the upcoming ones an opportunity to excel.”

Emmanuel Akapo, the Director and founder of Tenstrings Music Institute disclosed that the essence of organising the event is to bring the two related industries together for harmony and social interaction which helps to identify issues in the industry. “I am also using the opportunity to expose the music institute which is relatively young in Nigeria,” he added.