By Adeboye Amosu:
Nigeria international Isaac Success returned to the Watford bench on Saturday in their 1-0 Premier League defeat against Burnley at Turf Moor.

The 21-year-old forward has been injured for two months and only started full training with his teammates this week.

Scott Arfield scored the winning goal for the hosts on the stroke of half time.

Watford finished the game with 10 men with Marvin Zeegelaar receiving a red card on 39 minutes. 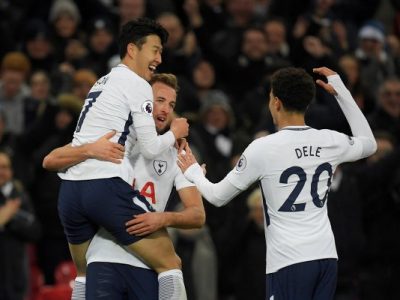 At Wembley Stadium, Tottenham Hotspur put behind them their recent poor run of form in the English Premier League by trouncing Stoke City 5-1.

Harry Kane scored a brace in the game with Son Heung Min and Christian Eriksen also on target for the Lillywhites.

Ryan Shawcross who scored an own goal in the game scored his side’s only goal of the encounter late on.

Crystal Palace and Bournemouth played out a 2-2 in another game on Saturday.

Veteran forward Jermain Defoe got a brace for the visitors, while Luka Milvojevic and Scott Dann were on target for Palace, for whom Christian Benteke missed a late penalty.

In other games, Swansea eased pressure on manager Paul Clement with 1-0 win through Wilfred Bony’s goal, while Huddersfield recorded a 2-0 win against Brighton.