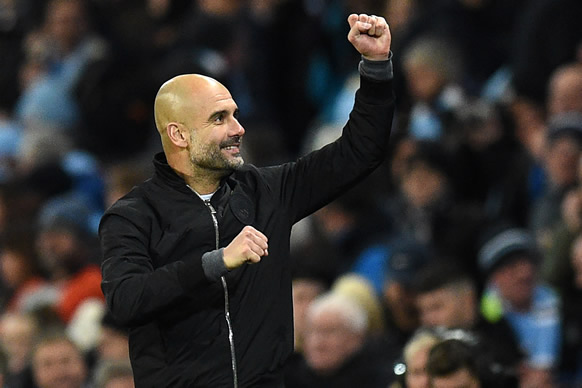 City won at Old Trafford for the second successive season on Sunday as goals from David Silva and Nicolas Otamendi clinched a 2-1 victory that moved the leaders 11 points clear of second-placed United.

United boss Mourinho claimed City were “lucky” because referee Michael Oliver failed to award a penalty for Otamendi’s challenge on Ander Herrera in the second half.

Herrera was booked for diving and City manager Guardiola made it clear he was tired of his old rival’s excuses.

“Last season it was the same, we won here and it was the referee. Today as well. Yesterday he spoke about the referee,” Guardiola said.

“We are an honest team. We had 75 percent ball possession, which means we wanted to play. We came here and did that.”

City’s substantial lead at the top makes them firm favourites for the title.

But Guardiola isn’t getting carried away and warned his players to forget dreaming of silverware because surviving the hectic Christmas period won’t be easy.

“This win means a lot in the way we played for our confidence but in three days we go to Swansea in the winter time,” he said.

“We are going to face a lot of difficulties. In December it’s impossible to be champions but it’s good for us.”

While Guardiola was coy about City’s title bid, he didn’t miss a chance to take aim at the critics who doubted whether he would be able to succeed in England.

City failed to win a trophy in Guardiola’s first season, but the Spaniard’s purist principles are now reaping a rich reward.

“The personality to play here is what I want. We can play this way in England. People said we couldn’t play the way we did in Barcelona in England but it is possible and we did it,” he said.

“I knew that last season. Always I believed we could do it. Everyone can play how they want, that’s why football is so beautiful.

“I’m happy to go to Stamford Bridge and Old Trafford and to beat them in this way.”