The Spanish beach soccer team have emerged champions of the 2017 COPA Lagos Beach Soccer tournament after edging out Nigeria’s Super Sand Eagles 6-5 in a thrilling final played at the Eko Atlantic City in Lagos on Sunday.

It is Spain’s first ever COPA Lagos title as they subjected the Sand Eagles to another final defeat following the Nigerians’ loss to Switzerland in last year’s final.

Both Spain and the Sand Eagles went into the game undefeated after winning their previous two games in this year’s tournament.

In the first period Spain went in front twice with goals from Llorenc and Eduard Molina but Emeka Ogbonna and Ekuitmi Eganosi brought the Sand Eagles back on two occasions to end the first period 2-2.

The second period saw the Sand Eagles go 3-2 up but Molina equalised to bring Spain back in the game to 3-3.

Molina once again got on the score sheet to put Spain 4-3 up but Abu Azeez drew the Sand Eagles back level.

Once again the Spaniards went in front again, this time through their goalkeeper Francisco Lopez who gave them a 5-4 lead close to the end of the second period.

The Spaniards extended their lead to 6-4 thanks to Adrian Garcia in the third period.

With time running out, Azeez pulled a goal back for Nigeria which was only a consolation goal as Spain held on to claim their first ever COPA Lagos title. 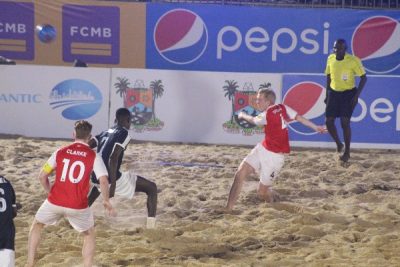 Also, Morocco secured their first win as they edged Lebanon 2-0.

The likes of Austin Eguavoen, Victor Ikpeba and Victor Agali were in action for the ex-internationals, while stars such as Sound Sultan and Solid Star featured for the entertainers