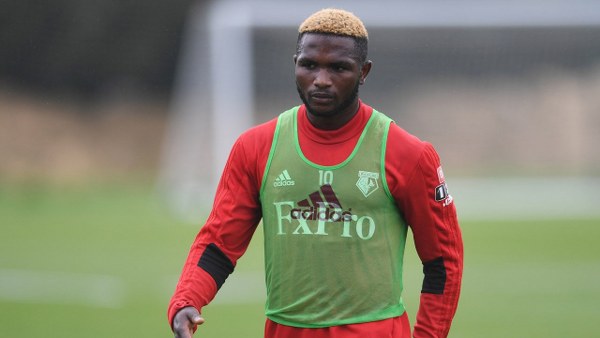 Nigeria international Isaac Success is back in training after spending two months on the ssidelines due to a knee problem, reports Completesportsnigeria. com. The Watford forward returning to full training is a welcome development for manager Marco Silva whose side are just one game into a spell of eight league games in 31 days.

“He has started full training with the team,” Silva said in his pre-match conference ahead of the Hornets English Premier League clash against Burnley this weekend, referring to the Super Eagles forward.

“He’s working now since the first day of the week. Now we need to progress his physical condition. Everything is okay with his knee now. Now is his moment to carry on to work hard.

“It’s a matter of taking care of his physical condition as it’s almost two months now without training or a match. I believe in the next weeks he will be able to play.”

Silva sounded like he sees the one-time club record signing as being part of his plans and someone who could provide cover and competition for the all-important wide positions in his tried and tested attacking formation.

“He is one player who has been injured the last two months,” said Silva.

“He comes back now, and now is the moment to train and come in a good condition to fight for his place in the XI.”