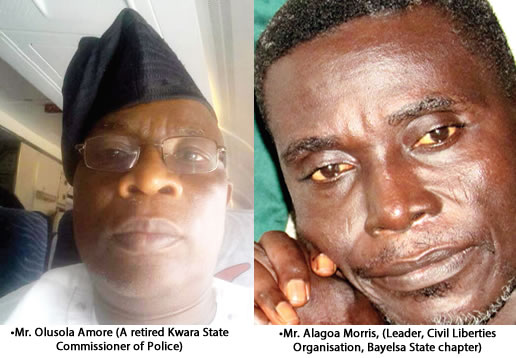 They should not scrap the Special Anti-Robbery Squad. It is like you are asking for the scrapping of the Nigeria Police Force. It is not necessary to scrap SARS. The public only needs to ask that the alleged excesses of the unit should be curtailed. When I was the CP in Kwara State, I was able to curtail all the excesses of SARs under my command. All that members of the public need to do is to ask for the telephone number of the state Commissioner of Police, or anybody that they can reach (within the system) to report when SARs is involved in any form of excess.

When I was in charge of Kwara State, I was picking all calls and that was how I got sufficient feedback and addressed issues including the excesses of SARs. It is just feedback.  Once members of the public can have an avenue to lodge whatever complaint they have against SARs and such issues are promptly addressed, that is what is needful.

If you scrap SARs because of people’s complaint, and people complain against Mobile Police Force, you scrap them; they complain about traffic wardens, you scrap the warden police; what will be left?

You cannot say because one person is bad, then the whole people are bad. Though there are allegations of some bad eggs among SARS, there are many officers among them that are good.

Try every system; there are good and bad ones, but once the bad ones are identified, they should be dealt with. Members of the public should feel free and bold to report the excesses of members of SARS to the appropriate authorities.

The need for the creation of the Special Anti-Robbery Squad in the Nigeria Police to bridge certain lacuna must not be lost on us. If SARS is being affected by the Nigerian factor such as corruption and impunity, that is not enough to scrap the unit. Rather, the issue should be addressed squarely. Scrapping SARS will be counter-productive.

The question now begging for an answer is: What should we do if our only source of water is polluted? We sure need experts to make the source of water safe again. But we may need to avoid the water source for a while, till we seek an alternative source.

At the same time, we should make sure that the source of pollution is identified and stopped. So, it should be applied to the SARS. Therefore, let the complaints by the Nigerian public be properly investigated and errant officers thoroughly disciplined.

There should also be a public reporting mechanism to expose the wrongdoing by the men of the unit. Another question is, where is the assurance that these policemen won’t do the same if SARS is scrapped and they are posted to different units?

My take is that, instead of throwing away the baby with the bath water, it is advisable that we deal with the specific issues. It is my view that police in general should rise up, scale up and redeem their battered image.  Despite the fact that the police are rated as one of the worst in the world by an international organisation, the problem in SARS mirrors the Nigeria police. •Mr. Alagoa Morris, (Leader, Civil Liberties Organisation, Bayelsa State chapter)

Having a base in virtually all states of the federation, this unit perpetrates the highest level of abuse of human rights. They harass innocent citizens at will and arrest anybody without justification. Their conducts and actions are so bad that they have successfully earned the reputation of a force within the force. They kill and maim at will; they shoot arbitrarily, search without recourse to the law and even detain beyond the constitutionally required time. The funny fact is that this special unit that was set up mainly to combat cases of armed robbery has turned itself to a petty unit harassing and arresting anybody they feel like arresting. If you wear a good shirt, you will be arrested; use a nice mobile phone, they will stop and search you; and woe betides you if you have tattoo on your body. The atrocities of this unit are so bad that we are left with no choice but to ask for its disbandment. There seems to be no other alternative to this as the operatives have abandoned their core responsibility and are more interested in shadow chasing and harassing of innocent citizens. We call on President Muhammadu Buhari, the Inspector-General of Police, the Police Service Commission, the National Assembly and other relevant bodies to look into these issues of human rights abuse by the SARS. •Olaseni Shalom (Director, United Global Resolve for Peace)

Like the saying goes, there is no smoke without fire. There is the need for the police to carry out a thorough investigation into the activities of this unit, like the Inspector-General of Police has promised. The confidence of the Nigerian people must be rebuilt if the police must succeed. We have heard all sorts of stories about the atrocities of some members of this special unit; they cannot become a law unto themselves. In a country where our collective security is under serious threats by non-state actors, we cannot afford to have state actors joining forces with non-state actors to unleash terror on citizens they are supposed to protect. •Auwual Musa Rafsanjani (Executive Director, Civil Society Legislative and Advocacy Centre)

The formation of the Special Anti-Robbery Squad across the nation is an affirmative admission by the police leadership in Nigeria that the regular anti-robbery sections have failed. Unfortunately, a very dangerous group of police officers were randomly selected to constitute SARS with minimal consideration and training in community policing. The results have been disastrous and an upswing in anti-police feelings, owing to the insidious tactics of these officers who have become a law unto themselves.

They kill without consideration for the rule of law, torture and cause serious bodily and mental harm to anybody unfortunate to be their victim. They adopt all illegal torture tactics to extract confessions, including denial of sleep, food and health care. Other stupid and illegal methods and tactics they adopt is psychological warfare, wherein lawyers are denied access to suspects and where allowed, lawyers are harassed and abused, prompting many to avoid key and timely legal assistance.

It is a major administrative anomaly to have two departments within the police – anti-robbery and SARS. In a bid to outdo each other, officers from these competing departments adopt illegal and criminal approaches to achieve their goals. In many states, many policemen lobby to be posted to SARS because a lot of opportunities exist for milking hapless Nigerians. They have become experts in extrajudicial killings and arraignment of poor innocent persons on trumped up charges. Their use of intelligence is poor. Rather, they use torture or perching on highways to arrest suspected criminals.

Nigeria needs proactive policing and not reactive policing. Proactive policing is all about intelligence and cultivation of informants. But the Nigeria Police do not encourage this, either by not paying or their unreliability to keep sources protected. The SARS should not be scrapped. It has to be reorganised. A detailed and discrete background check should be carried out on its members nationwide and those involved in criminality should be removed. Officers should be trained on the human rights of suspected criminals and also create institutional machinery essential to the realisation of these rights and prevent its violations. •Jefferson Uwoghiren (A Benin-based legal practitioner)