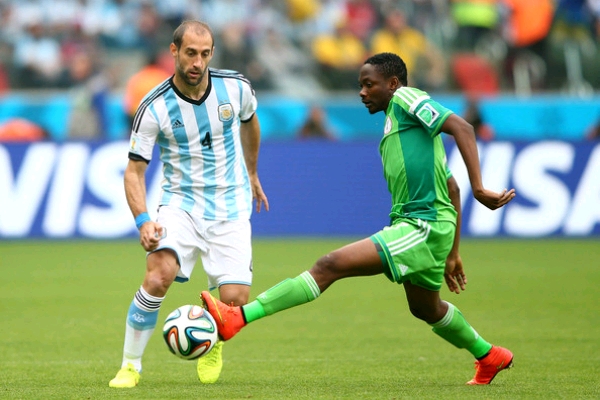 Iceland will be the third debutant Nigeria will face at the senior World Cup.

Nigeria’s first encounter with a debutant was in the 1994 World Cup against Greece who they defeated 2-0 with goals from Finidi George and Daniel Amokachi.

And the second time was against Bosnia Herzegovina at the 2014 World Cup in Brazil which Nigeria won 1-0 thanks to Osaze Odemwingie’s goal.

Nigeria have met European countries two times in their World Cup opening matches and have emerged victorios on both occassions.

The first time Nigeria met a European country in their opening World Cup group game was at the USA 1994 World Cup against Bulgaria which Nigeria won 3-0.

The late Rashidi Yekini, Daniel Amokachi and Emmanuel Amuneke were the scorers for Nigeria.

And in their first game at the 1998 World Cup in France, they met Spain and stunned them 3-2.

In their opening games at Korea/Japan 2002 and South Africa 2010, they faced Argentina and at the 2014 edition in Brazil, they tackled Iran.

The first and only time Nigeria and Iceland met was in a friendly game in 1981.

The game was played in Laugardalsvollur, Reykyavik, in Iceland which Nigeria lost 3-0.

–ARGENTINA HAVE ALWAYS BEATEN NIGERIA BY ONE GOAL MARGIN

In their previous four games against Nigeria, Argentina have never beaten Nigeria by more than just one goal margin.

The first time Nigeria were drawn in the same group with two European countries was in their debut in USA 1994.

Bulgaria and Greece became the first two countries to be in the same group with Nigeria at the World Cup.

France 1998 also saw Spain and Bulgaria placed with Nigeria in the same group.

And during the 2002 edition in Korea/Japan, England and Sweden found themselves together with Nigeria and Argentina.

The first and only time Croatia met an African team at the World Cup was Cameroon in the group stage of the Brazil 2014 FIFA World Cup.

Croatia triumphed 4-0 with goals from Ivica Olic, Ivan Perisic and a brace from Mario Mandzukic.

However, both Croatia and Cameroon crashed out in the group stage.

Croatia made their debut at the France 1998 World Cup and shocked everyone by reaching the semi-finals and finishing third.

But their next three World Cup appearances in Korea/Japan, Germany 2006 and Brazil 2014 have seen them crash out in the group stage.

Croatia and Argentina’s first ever encounter at the World Cup was the 1998 edition in France.

They will meet for the second time at the World Cup when they face-off in their second Group D game at the 2018 World Cup.