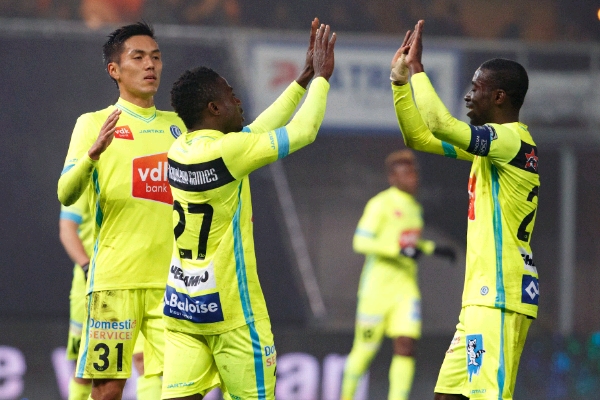 By James Agberebi: Super Eagles forward Moses Simon was the hero for 10-man Gent as his goal secured a 1-0 away win against Zulte-Waregem in the Belgian top flight on Sunday.

Simon scored in the 29th minute to give Gent the hard-fought victory.

However, Simon’s Nigerian teammate Anderson Esiti was sent off after receiving his second yellow card.

It was his second sending off since joining Gent last season.

Simon has now scored four goals in 14 league appearances for Gent this season.

Also in action for Gent was Samuel Kalu who was replaced in the 66th minute of the game.

In the Portuguese Primera Liga, Super Eagles midfielder Oghenekaro Etebo made a 90 minutes appearance for 10-man Feirense who lost 1-0 to visiting Aves.

Feirense’s Machado was given a straight red card in the encounter.

Nigerian duo, Kenneth Omeruo and Emem Eduok, featured for Kasimpasa who lost 4-2 away to Fenerbahce in the Turkish first division.

While Omeruo saw 90 minutes of football, Eduok made way in the 66th minute.

And in Cyprus, Super Eagles defender Shehu Abdullahi was in n action for 90 minutes as his side Anorthosis pipped Nea Salamis 1-0 to remain unbeaten after 14 league games.

Anorthosis are currently top on 30 points in the 14-team league table.