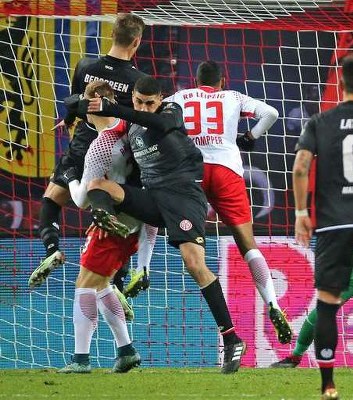 By Johnny Edward:  Nigerian forward Isaac Success returned to Watford substitutes bench in the Hornets 1-0 defeat to Burnley in the English Premier League on Saturday. It was his fifth time this season Success was named in the matchday squad that he was an unused substitute.

At the London Stadium, Victor Moses was subbed on for Marcos Alonso in Chelsea’s 1-0 loss away to West Ham on Saturday. It was the second time Moses was substituted on this season in the 10 games he has featured in for the reigning English Premier League champions.

At the King Power Stadium, Wilfred Ndidi made his 16th league start of the season for Leicester City who defeated Newcastle United 3-2. His compatriot Kelechi Iheanacho was an unused substitute. Iheanacho has made two starts and seven substitute appearances. Ahmed Musa was excluded from the matchday squad.

At the KCOM Stadium, Ola Aina returned to the starting line-up for Hull City who came from a goal down to defeat Brentford 3-2 in their Championship clash to hand new manager Nigel Adkins a winning start at the club. The win was Hull’s first in eigh games. Aina has made 16 starts for the Tigers this season. The win moved the Tigers up into 18th place – six points away from the relegation zone in the Championship.

Sheyi Ojo was the match winner for Fulham who defeated Birmingham City 1-0 at Craven Cottage. It was Ojo’s third goal in 11 English Football League Championship games.

Super Eagles defender Leon Balogun made his fifth start for FSV Mainz in Saturday’s 2-2 draw against Leipzig. It was Balogun’s first games since suffering a hand fracture in November. The Nigerian international was on for the whole encounter.

In Turkey, Ogenyi Onazi was in action for Trabzonspor who defeated Kasimpasa, parading Kenneth Omeruo and Emem Eduok, 3-0 away in the Turkish top flight on Saturday. The win was Trabzonspor’s fourth straight in Turkish Super Lig and Kasimpasa’s second straight defeat.

While Omeruo and Onazi played the entire duration of the encounter, Emem Eduok,was replaced in the 83rd minute in his 14th game of the season. Eduok has scored four goals.

Both Onazi and Omeruo have made 11 league appearances for their respective teams (Trabzonspor and Kasimpasa), scoring one goal apiece in the league for so far this season.

Still in Turkey, Nigerian Rio 2016 star Azubuike Okechukwu played the entire duration of Yeni Malatyaspor 3-2 home loss to Goztepe. Okechukwu who has two caps for the Super Eagles has made 11 appearances in the Turkish top flight.

In Holland, Kelechi Nwakali made his second Eredivisie start for VVV Venlo who drew 2-2 away at SC Heerenveen. Nwakali has made eight appearances so far this season.

In Belgium, Samuel Kalu and Moses Simon were both in action for Gent who defeated Kortrijk 2-0 on Saturday. Both Nigerian players were subbed off in the 70th and 85th minutes of the win.