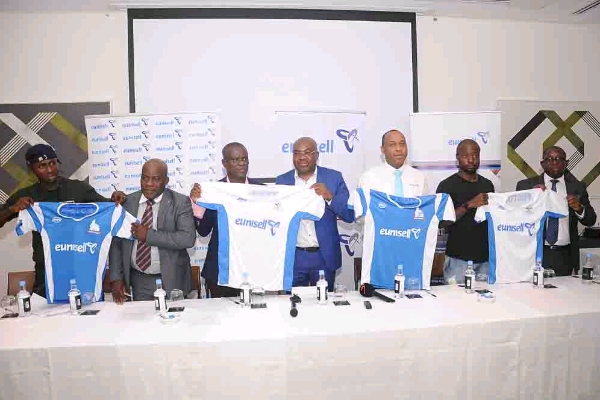 The Port Harcourt club and Eunisell Limited, a leading Chemicals and Engineering Solutions provider in Africa, signed the deal at an elaborate ceremony in Lagos on Monday.

“We are pleased to renew our sponsorship deal with Eunisell. They have backed us in the past few years and it’s good that we have extended this relationship for another year,” Okey Kpalukwu, General Manager of Rivers United, said at the ceremony.

“We are proud to be associated with a top and successful company like Eunisell. We hope to see this associationcontinue for a long time.

“On our part, we will make sure we do well in the NPFL next season to make them proud.

Rivers United captain, Austine Festus, was also delighted to see his team unveil their new jerseys and thanked Eunisell for their kind gesture.

“We thank Eunisell for this wonderful gesture. It’s a testament of their belief in Rivers United as a club,” Festus stated.

“We are lucky to have a big organisation like Eunisell Limited backing us which is a big inspiration for us to do well next season.”

“We are pleased to renew our sponsorship of Rivers United Football Club. Today is another event to unveil the jerseys for the new campaign.

“We have been supporting the club for a while now with our belief in them growing with every new season. Our support is a strong evidence of our belief in Nigerian football,” Ikenga said.

“We continue to recognise the important roles of football and sports generally play in our lives and in our economy.

“We urge them to take inspiration from this honour and win the league.”