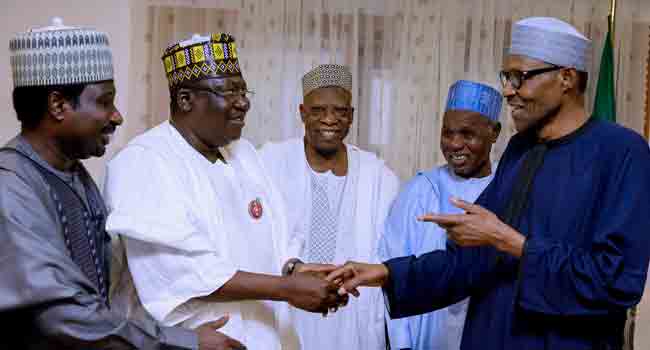 President Muhammadu Buhari on Sunday hosted the Governor of Katsina State, Aminu Bello Masari, and some northern Senators at his home in Daura, Katsina State.

The lawmakers, from the Northern Senators Forum, who were received by the President are Senators Kabiru Gaya, Mustapha Bukar, Abdullahi Adamu and Senate Leader Ahmed Lawan.

Governor Masari led the Senators who were in the state for a retreat, scheduled to hold on Tuesday, to the President’s hometown, where they held a meeting behind closed doors.

Senator Gaya told reporters after the meeting that the lawmakers discussed good governance and national unity with the President without giving further details.

Pictures of the visit by the President’s personal photographer, Bayo Omoboriowo, shows the President happily welcoming his guests and posing for photos with them.

President Buhari had travelled to his hometown on Thursday at the end of his two-day visit to Kano.

He is, however, scheduled to attend the ‘One Planet Summit’ in Paris, France on Tuesday, December 12, 2017, along with over 50 world leaders.