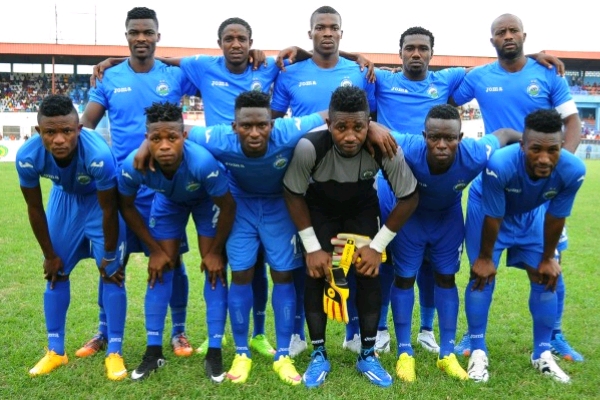 By Adeboye Amosu in Kano: Nigeria Professional Football League champions Plateau United rallied back to earn a share of the spoils against Enyimba as both teams battled to a 1-1 in the opening match of the Super Four competition at the Sani Abacha Stadium on Monday, reports Completesportsnigeria. com.

Chinedu Udeagha who recently joined the Peoples Elephant from oriental rivals Enugu Rangers put Enyimba ahead in the 33rd minute, while Tosin Omoyele who shone in the Nigeria National League for Osun United last season got the equalising goal for Plateau United in the 92rd minute.

Enyimba coach, Paul Aigbogun, who is back for his third stint at the club gave starting berths to new signings Onaolapo Olayinka, Wasiu Alalade, Ernest Governor and Udeagha and they all rewarded him with fine performances.

The Aba side took control of the game from the start but failed to carve out any real goal scoring opportunities.

They were however reduced to 10 men when stand-in captain Uche John received a red card for elbowing Plateau United’s midfielder Jimmy Ambrose on 19 minutes.

Despite their being a man down, Enyimba won a penalty in the 23rd minute when the lively Udeagha was fouled in the box by Ibrahim Akide.

Chinonso Okonkwo’s effort was however saved by Okiemute Odah.

Udeagha fired Enyimba ahead 12 minutes from the break, slotting past the on-rushing Odah following a superb pass by Alalade.

Enyimba had a chance to increase their lead two minutes before the break through
Stanley Dimgba but his effort was well saved by Odah, while King Osanga skied over for Plateau United when presented with a decent chance in added time.

Plateau United improved after the break with Omoyele and Ambrose getting close to finding the equalising goal for them.

The Jos side had a goal scored by Ibeh Johnson ruled out for offside in the 63rd minute.

Substitute Aldulrahman Bashir and Freedom Omofowan wasted glorious chances for Enyimba before Omoyele restored parity late on after Omofowan handled the ball in the box.