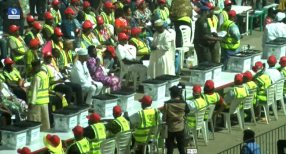 A former acting Chairman of the Peoples Democratic Party (PDP), Mr Uche Secondus, has emerged as the party’s National Chairman, ending its long and troubled quest to elect leaders after it suffered defeat in the 2015 Presidential election.

Mr Secondus defeated a former Minister of Education, Professor Tunde Adeniran, Founder of Daar Communications, Raymond Dokpesi, as well as a Former Minister of Sports and Special Duties, Taoheed Adedoja, in a controversial election at its national convention which commenced on Saturday at the Eagles Square in Abuja.