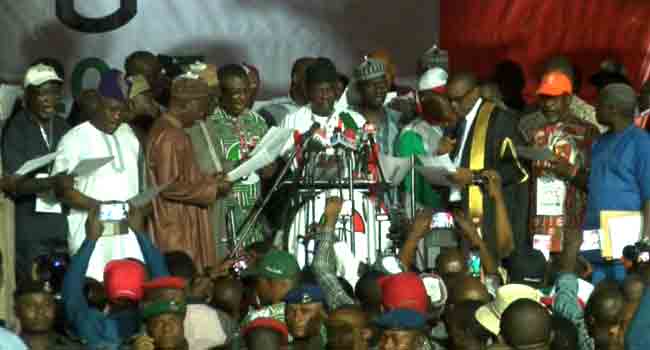 Two years and nine months after it lost its 16-year-long grip on power at the Federal level, the Peoples Democratic Party (PDP) on Saturday elected officials that will lead it in the quest to wrest power back from the All Progressives Congress (APC).

It has been a long trouble-fraught road for the PDP to get to this point after the APC swept to victory in 2015, and Saturday’s election was not without controversy.

Two of the chairmanship candidates – former Minister of Education, Professor Tunde Adeniran, and Daar Communications Founder, Raymond Dokpesi have condemned the election, insisting it was fraudulent.

Despite their complaints, elected officials were sworn in at about 3:30 am on Sunday morning.

Here is the list of winners as declared by former Benue State Governor, Mr Gabriel Suswam, who served as chairman of the electoral committee:

Nine candidates had been in the National Chairmanship race as of Friday evening, seven from the South West and two – Secondus and Dokpesi – from the South-South.

Six of the candidates from the South-West, however, pulled out of the race starting late on Friday with a former National Deputy Chairman of the party, Bode George.

Before the election commenced, Professor Adeniran became the sole candidate from the South West.