Abuja Gov. Dickson Seriake of Bayelsa, has said that Chief Olabode George deserved to be treated with respect and dignity as a stalwart of the Peoples Democratic Party (PDP) and a man that had put in so much in the country`s development.

Seriake said this while reacting to the withdrawal of some aspirants jostling for the national chairmanship position of the party he said that leaders of the party would do everything possible to ensure that aggrieved nerves were calmed.

In his remarks, a former Governor of Akwa Ibom, Sen. Godswill Akpabio said that the party stalwarts were prepared to support and work with whoever emerged as its chairman.

He assured that better days were ahead of the PDP and Nigerians generally.

Chief Raymond Dopeksi, a frontline aspirant in the race, however, said he would go through the process till the end and stand by its outcome.

Dokpesi advised the party`s leadership to evolve ways of financing it, rather than depending on some of its bigwigs.

This, he said was critical to avoid imposition of candidates by those who were seen to be financing the party and money politics.

Chief Gbenga Daniel, a former Governor of Ogun and an aspirant to the Peoples Democratic Party (PDP) national chairmanship position has stepped down from the race.

Daniel at the convention ground on Saturday in Abuja, said he was withdrawing from the race to ensure peace and unity in the party. 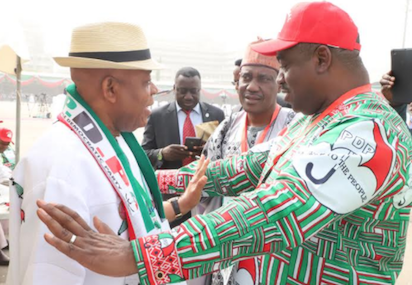 Jimi Agbaji and Dr Aderemi Olusegun had also withdrew from the race.

It is expected that some others may also withdraw from the race.

Agbaje said he withdrew from the race to reduce the number of aspirants from the South-West in order to brighten their chances in the race.

The withdrawal of the three aspirants including Chief Olabode George, a member of the PDP Board of Trustees brought the number of those who had withdrawn from the race to six.

George earlier withdrew from the race on Friday night, saying that the South-West was already cheated with the entrants of aspirants from the South-South.

George, who said he stood for the party`s micro-zoning principal which had been jettisoned, also said that the Rivers Governor, Nyesom Wike abused the Yoruba people on national television.

According to him, Wike accused the Yoruba people that they have never contributed anything meaningful to the success of the PDP.

A statement George described as an insult.

He maintained that Wike must tender an unreserved apology to the Yoruba people for his utterances against the race.

He also alleged that the PDP chairmanship position had been sold to the highest bidder.

“It appears the PDP is bent on self-destruction. I can’t be part of this, the chairmanship position has been sold to the highest bidder,“ George stated while announcing his withdrawal from the race.

“It appears that PDP is bent on self destruction. It has lost its soul. I cannot be part of this criminal allegation, the PDP is now mangled.

“I hereby withdraw from the fraud. As a Yoruba patriot, I will stand for our people,’’ George said.

He added that he entered the race due to the micro zoning arrangement which he said had been trashed.

He, however, explained that he did not step down for anybody but for the process and on principle, adding that his measure of experience was too heavy.