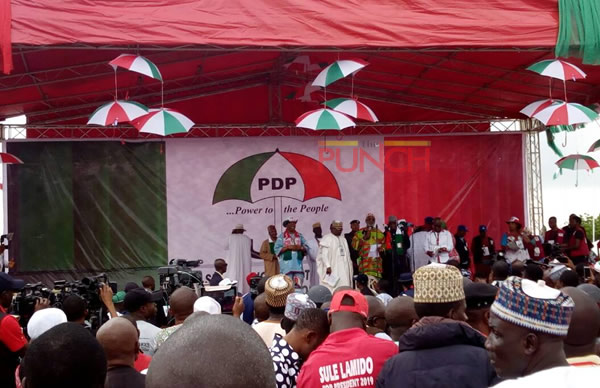 Eight out of the nine screened and cleared national chairmanship aspirants of the Peoples Democratic Party are today competing to get the support of the 2,233 delegates who are voting at the party’s national convention, which holds on Saturday (today).

The list of the delegates was exclusively obtained by our correspondent in Abuja on Friday.

It was gathered that the number of delegates from Osun State was small because of the inconclusiveness of the congresses in the state.

Majority of the aspirants had lobbied the delegates ahead of the convention. It was gathered that some were induced with cash while other delegates were promised some other benefits by the candidates.

Chairman of the Convention Planning Committee, who is also the Governor of Delta State, Dr. Ifeanyi Okowa, however, warned the aspirants to go by the rulebook.

It was gathered that all the aspirants were given forms to fill, with the promise that they would accept the result of the convention.

Okowa promised that his committee would conduct a credible and transparent convention, noting that adequate steps had been taken to secure the Eagle Square, venue of the convention.

He said, “We are very much aware of the security alert about Abuja. The security sub-committee is working very closely with the security agencies to ensure a smooth convention.

On his part, the Chairman, Post-Convention Planning Committee, who is also the Governor of Bayelsa State, Mr. Seriake Dickson, tasked all the aspirants to demonstrate sportsmanship before, during and after the contest, adding that only one of them would win the election.

He thanked Okowa for his efforts, describing him and the convention planning committee as “People we have confidence in.”

Meanwhile, after a closed-door meeting held in a hotel in Abuja on Friday, members of the South-East caucus of the PDP passed a confidence vote in Secondus, declaring him as the only one they had resolved to vote for in today’s election.

PDP national vice chairman in the zone, Chief Austin Umahi, told journalists that party leaders in the zone had decided to support Secondus in his bid to become the next national chairman.

The communiqué read to journalists after the meeting said, “Without prejudice to the right of other aspirants to this national chairmanship position, credible and transparent election, we have decide to back and vote for Prince Uche Secondus for the position of national chairman of our great party.”

The stakeholders also said they had agreed to vote for Col. Austin Akobundu for National Organising Secretary; Ude Okoye for Youth Leader; and Alphonsos  Gerald as Deputy Financial Secretary.

We have no preferred candidate – Jonathan, Atiku

Meanwhile, former President Goodluck Jonathan and former Vice President Atiku Abubakar have said they have no preferred candidate for the convention.

Jonathan stated this in a statement on Friday by his media adviser, Mr. Ikechukwu Eze.

The statement read, “As the father of the party, ex-President Jonathan has no preferred candidate for any of the positions, and he is prepared to work with all those that will emerge as members of the new National Working Committee, to ensure that the party regains its pride of place in the affairs of the nation.”

Also, Atiku said he had no preferred candidate in today’s election.

In a statement issued by his media office on Friday, Atiku said he would not support any particular candidate over others, but that he would rather support the emergence of a more virile political party post-PDP national convention.

The former Vice President said the challenge before the delegates would be to vote according to their conscience.