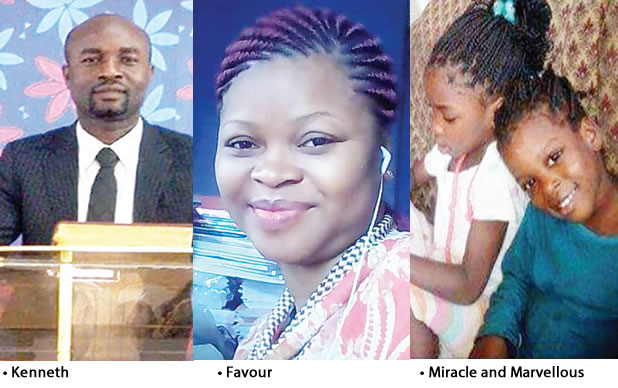 Tragedy struck on Buraimoh Street in the Bariga area of Lagos State on Wednesday after an early morning fire suspected to have been triggered off by a power surge, claimed the life of a pastor, Kenneth Eze; his wife, Favour; and their two children, Miracle and Marvellous.

Kenneth was reported to be the pastor in charge of World Harvest Ministry in the Gbagada area of the state.

PUNCH Metro learnt that the family of four lived inside a shop where Kenneth and his wife sold drugs and provisions.

Kenneth reportedly relocated his family to the shop after he could not raise money to pay rent for his former apartment.

Our correspondent gathered from witnesses that the Ikeja Electric restored power around 2am, which allegedly triggered off the fire in the shop.

The victims were said to have been trapped by the two-level security burglar proof at the entrance of the shop and its extension, leading to their death.

Officials of the Lagos State Fire Service, Lagos State Emergency Management Agency and policemen from the Bariga division, were said to have responded to the emergency.

A LASEMA official was alleged to have collapsed during the rescue operation.

As soon as the fire was put out, relatives of the victims were said to have taken the corpses to their hometown in Umueze Ala Ogboko, in the Ideato South Local Government Area of Imo State.

Burnt clothes, drugs, fans and a pot of vegetable soup were seen by our correspondent in the shop during a visit on Wednesday, as smoke still billowed from the dying flames.

Residents and family members of the victims also besieged the scene, as many sympathisers and passersby fought to catch a glimpse of the burnt shop.

Two other shops were affected by the inferno before the intervention of firefighters.

A screen printer, whose shop was opposite the victims’, told PUNCH Metro that a power surge triggered the inferno.

“I sleep in my shop as well because of the nature of my work. Power was restored around 2am and that was when the fire started. There was a sudden explosion in the shop. It was difficult to get close to the place because everywhere was on fire. The heat was intense.

“Later, firefighters brought out their corpses. It was the body of the woman that was brought out first, before those of the two children. They initially couldn’t find the pastor. After some search, they found his corpse in the shop, where he was probably attempting to find a way out,” the printer, who spoke on condition of anonymity, said.

The two children, Miracle and Marvellous, were said to be aged six and three  respectively.

A friend of the victim, Okechukwu Idoko, claimed to have mobilised some residents to put out the fire before the arrival of the firefighters, adding that their efforts were futile.

Idoko said he had discussed with the victim the previous day on the completion of his (Kenneth’s) house in the Ikorodu area of the state.

“He said he wanted to lay the tiles on the floor, and I advised him to put certain things in place first. That was our last discussion before he died. Despite the fire, the money he made from the previous day sales in the shop, and his telephone were intact,” he added.

PUNCH Metro gathered that Kenneth’s wife, Favour, had been sick for some time.

Her sickness was said to have been caused by two caesarean births, which left her bedridden. She had to be taken to the village for treatment.

A family member of the victim, Okey Emereonye, said the sickness affected the finances of the family, which made Kenneth to quit his former apartment and relocate the family to the shop.

He said, “When I visited them on Sunday at this place, I was surprised to see that she had returned from the village. She was making chin-chin, which she branded, ‘Mirvel,’ from the names of their children. I asked why Favour was brought back and Kenneth said he believed that being around her children would hasten her healing. I never knew it was the last time I would see them.

“Kenneth was the breadwinner of the family. His parents are still alive. They have been informed and the bodies of the victims were taken directly to the village through the help of his church members.”

The Director of the Lagos State Fire Service, Rasak Fadipe, said the agency received a distress call around 2.48am, adding that the Alausa and Ilupeju fire divisions responded.

He said, “We met the fire well alight and our men put it out. There were two levels of burglar proof – one at the entrance of the shop, while the other covered the extension. We found it difficult to gain access because of the burglar proof bars.

“We should not turn our houses to prisons. Safety is very important. Every member of a family should know how the door is locked at night. We should discourage the use of keys to lock doors. When there is a fire incident, people should raise the alarm before it gets too late.”

He said the cause of the fire incident had yet to be established, adding that investigations were ongoing.

“It happened inside a chemist. A man, his wife and their two children were consumed by the fire, which started early in the morning. We alerted the fire service and other emergency responders to the scene,” he added.

The Head, Corporate Communications and Media, Ikeja Electric, Felix Ofulue, said the IE was not aware of the incident.

He added that if the power company was at fault, the emergency workers would  have informed the company.