The Vice-President, Prof. Yemi Osinbajo, on Saturday night urged Nigerians to re-examine themselves in the fight against corruption toward developing a positive nation. 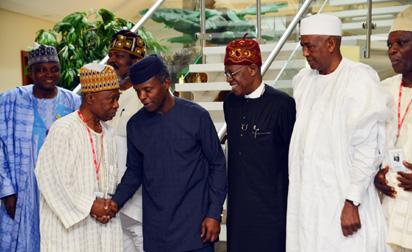 They gave the advice at the  event organised by the civil society group to commemorate the 2017 International Anti-Corruption day.

Osinbajo said,“ We should re-examine ourselves  and move toward changing our perception and our country will one day, overcome this menace known as corruption.’’

According to him, the president has always reinstated severally that, “if we don’t kill corruption, corruption will definitely kill us”, which is why he had given strict instructions on tackling corruption.

He said that no nation could survive with the presence of corruption in her system, adding, “Corruption is one thing that will kill us if we don’t fight it hard indeed.

“We need strong willed men and women who are  committed to fighting corruption, though we have had notable committed persons but we need more people who are crusaders and zealous,” he said.

He said that one of the very important resources in tackling corruption was not just arresting victims and detaining them, but having to reform them.

The Vice-President commended the CYIAC group for taking a bold step in complimenting the efforts of the government by reaching out to the youths to join in the fight against corruption in the country.

“I have not lost my zeal in this commitment to fight corruption especially with the involvement of the young people who are vulnerable targets in building or loosing integrity,” he said.

Also, the Minister of Information and Culture, Alhaji Lai Mohammed in his address commended Foluke Michael, the project director, CYIAC and her team, for focusing their attention on the youths.

Mohammed said that was the best step in tackling corruption.

“Targeting the youths is the best way to fight corruption because they are the future hope of our country and that is why the CYIAC group must be commended for taking this right step.

“ The fight against corruption is the toughest task but can be much easier if we have the Nigerian youths because they represent a large chunk of the society,” he said.

The minister expressed his disappointment saying that the resources which would have been used to take care of the youths had been stolen by the ‘fat cats’.

“It is so unfortunate that billions and trillions of dollars that would have been used in providing good and necessary amenities were stolen by looters.

“ But I want to reassure everyone that we are already driving corruption under the table by recovering billions of naira monthly, saving monies from ghost workers and raising our foreign reserve,” he said.

The minister said that the current administration would take this initiative to every nook and cranny of the country, stressing that, “If we don’t fight it, it will overwhelm us.”

Also, the United Nations Project Director, Mr Glen Prichard, said that the success of tackling corruption was to have a coalition of all arms in the struggle.

Similarly, the Consul-General of the Federal Republic of Germany, Mr Ingo Herbert, commended the Federal Government for waging war against corruption.

Herbert, however, said that it existed everywhere in the world.

“ Corruption is like a disease which exists everywhere but it becomes epidemic when it is too high and so should be vaccinated through anti-corruption groups as CYIAC,” he said.

The Acting Chairman of EFCC, Mr Ibrahim Magu said the current administration had zero tolerance to corruption because it was a setback to development.

“The best strategy is to have all organs, young and old, coming together to fight corruption.

“It is a major force for underdevelopment and we are almost chasing it out,” he said.

A civil rights activist, Dr Joe Okei-Odumakin, said that if Nigerians did not kill corruption, corruption would kill them.

“Power does not corrupt people; it is the people that corrupt power.

“The Federal Government  has created an enabling environment, we should think of what we can do to support this initiative and not just what our country can do for us,” she said.

Okei-Odumakin, the initiator of Women Arise for Change Initiative, said that though corruption had destroyed the some of the nation’s institutions, there was still hope to ensure that it was minimised.