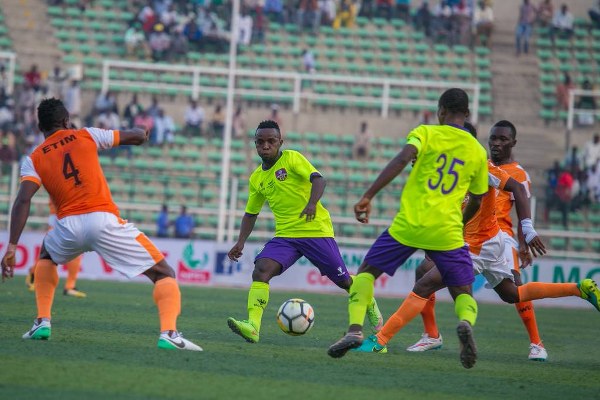 By Adeboye Amosu in Kano: MFM FC head coach, Fidelis Ilechukwu, has attributed his team’s poor display against Akwa United in Monday’s Nigeria Professional Football League Invitational Tournament clash with Akwa United to their inability to register their new signings ahead of the competition, reports Completesportsnigeria.com.
The Olukoya Boys named only three players; Jonathan Zikiye, Ospino Egbe and Akuneto Chijoke on the bench for the clash against the Aiteo Federation Cup champions as they await  the League Management Company clearance to feature their new players.
The Lagos club  struggled to make much impact in the through they scored first  through Adegboyega  Adekunle on 56 minutes with Ajiboye Otegbeye rescuing a point for Akwa United 10 minutes later.
“It was a tough game for us against a very a solid and experienced team,” Ilechukwu told Completesportsnigeria.com after the game.
”Having only three players on the bench made things more difficult for us as we were not able to field our best players and introduce the ones that could have made the difference from the bench.
“But I believe it was a good experience for us as we were able to cope with the challenges against a very tough opponent. This will surely help us in future.”
MFM’s next game is against Kano Pillars at the Sani Abacha Stadium on Friday.