Skip to content
By Adeboye Amosu in Kano:
Enyimba Technical Adviser, Paul Aigbogun, was disappointed to see his team conceded a late equaliser in their first match of the 2017 Nigeria Professional Football League(NPFL) Invitational tournament  against Plateau United, Completesportsnigeria.com reports.‎
The People’s Elephant played majority of the game with a man down after Uche John was sent off in the 19th minute.
They however dominated proceedings and  also missed a penalty in the encounter with Plateau United new signing Tosin Omoyele scoring the equalising goal from the spot in the 92nd minute after substitute Freedom Omofowan handled the ball in the box. 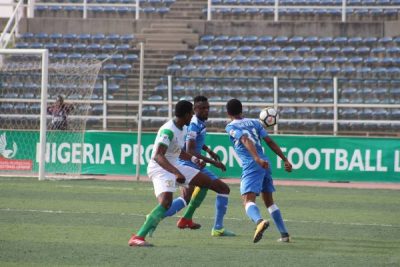 “To say I’m disappointed will be an understatement but I want to praise my players for their wonderful effort in the game,” Aigbogun told Completesportsnigeria.com after the game.
“We outplayed Plateau United despite their numerical advantage, and we could have won the game if not for those missed chances. We are disappointed, but it’s still pre-season and we have the chance to work on the mistakes we made during the game.
” Our next game will be against the home-based Super Eagles which is going to be tough, but we hope to make it to final.”
The next game in the group will be between Plateau United and the home-based Super Eagles on Wednesday.