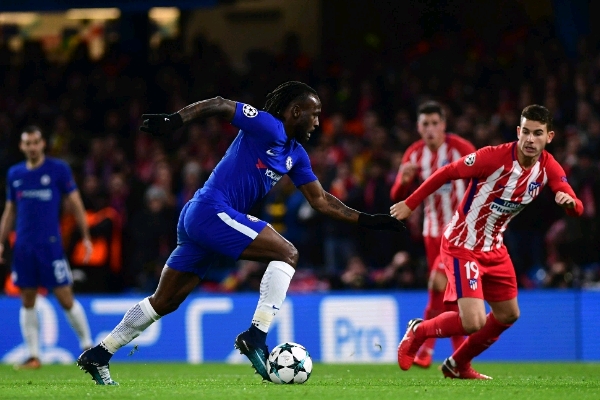 By James Agberebi: Super Eagles forward Victor Moses has expressed his disappointment that Chelsea could only settle for a share of the spoils against Atletico Madrid at Stamford Bridge in their final Group C UEFA Champions League game on Tuesday.

Chelsea had to come from behind to force a 1-1 draw against Atletico who dropped into the Europa League.

After a goalless first half, Atletico took the lead in the 56th minute through Saul Niguez.

But with 15 minutes remaining, an own goal by Stefan Savic drew Chelsea level.

Following the draw, Chelsea finished on 11 points, same points as AS Roma but finished second behind the Serie A club on goals difference.

Moses who was in action for 90 minutes in the game, praised his teammates for their fighting spirit.

“Disappointed to not take all three points but we never stop fighting,” he wrote on Twitter on Wednesday.