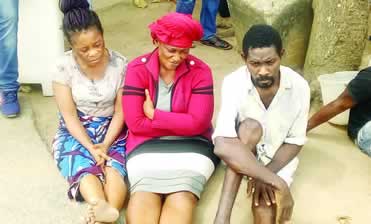 An artisan on Waidi Ogunseye Street, Meiran, Lagos State, Kingsley Oriaku, has owned up to selling one of his five children, a one-and-a-half-year-old girl, Chimamada Oriaku.

He also confessed to kidnapping his neighbour’s seven-year-old son, Gabriel Yanga, barely two months after he moved to the area, adding that he used the N310,000 he realised from the sale of the two children for the burial of his father-in-law.

PUNCH Metro learnt that the 37-year-old Abia State indigene sold his daughter in September 2017 for N190,000 to the operator of an orphanage home in Aba, Abia State, through a self-acclaimed evangelist, Adaeze Obi.

Two days after selling the daughter, he returned to his Lagos residence and reportedly lured Yanga out of the compound, while her mother was not at home.

He was alleged to have subsequently taken him to Obi in Abia State, who linked him up with one Loveth Nwako.

Nwako was said to have led Kingsley and Yanga to her sister in Anambra State.

The sister, Ngozi, collected the child and gave the artisan N120,000.

Our correspondent learnt that the suspects were arrested in November by operatives of the Special Anti-Robbery Squad, Lagos State Command, Ikeja, where Yanga’s parents reported the case.

Kingsley was paraded at the command headquarters in Ikeja on Monday along with two of the accomplices, Nwako and Obi.

He told PUNCH Metro that he sold the children to raise funds for the burial of his father-in-law in Abia State.

He said, “I am a bricklayer. My father-in-law died and we wanted to do his burial. Peoplr that owed me refused to pay me. I was living in Abia State before with my family. In July, I moved down to Lagos. Early in September 2017, I contacted a nurse called Patience that I wanted Chimamada to be at the orphanage for proper care. She works at a hospital where my wife gave birth to Chimamada.

He said after much pressure from his wife on the whereabouts of their daughter, he opened up to her, adding that his wife reported him to the police in Abia State.

“We later settled the case and our daughter was recovered from the orphanage. In November, policemen from Lagos came to pick me up in Abia State. Loveth (Nwako) and I led them to recover the boy as well,” he added.

The 38-year-old evangelist, Obi, said she got only N10,000 transport fare from Esther, the orphanage owner, adding that Kingsley lied to her (Obi).

She said, “Patience contacted me. She said Kingsley told her that he had separated from his wife and that no one was taking care of their children. She asked me to direct him to an orphanage where he could take one of the children to. I took Kingsley to the Queen Esther Motherless Baby Home. He told the woman that he was stranded and needed money to pay house rent.

“The woman gave him N190,000 and gave me N10,000 for transport. I did not partake in the transaction. She is a member of my church, Jesus Solution Ministry. I was in Port Harcourt (Rivers State) for a ministry on November 18 when I was arrested.”

Nwako, 49, said, “I attended Adaeze’s ministry. I told her that my elder sister needed somebody to be helping her because of her health condition. When Kingsley brought the boy to her, she called me. Kingsley and I took the boy to my sister in Anambra State. He said he wanted the boy to be taken care of, but he needed N120,000 to pay house rent. I only helped my sister. Her daughter is observing her national youth service in Nasarawa State.”

The Lagos State Commissioner of Police, Edgal Imohimi, said the case came to the knowledge of the command on October 29, 2017, through Yanga’s mother, Olabisi.

The CP explained that Yanga was recovered at the Ajali village, Anambra State, adding that the suspects would soon be charged to court.

He said, “She reported that her seven-year-old son was missing and all efforts to trace him proved abortive. Based on the report received, the command deployed a crack team of investigators drawn from SARS and arrested one Kingsley Oriaku. The team interrogated Kingsley, who confessed to sold the victim, Gabriel Yanga. He also confessed to have earlier sold his child to an orphanage for N190,000.”