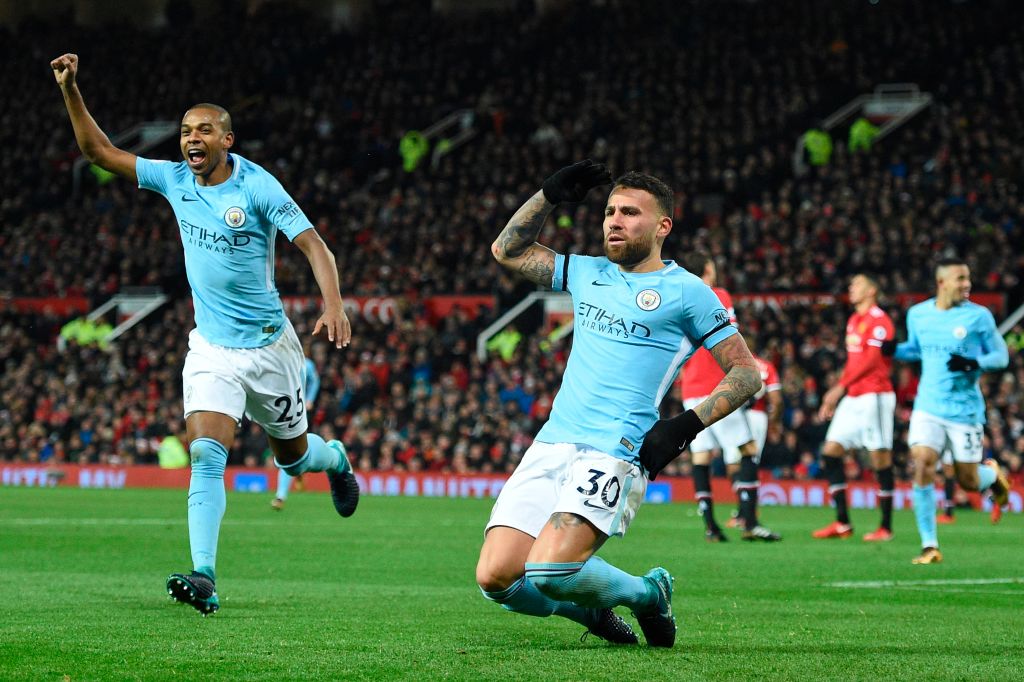 By James Agberebi: Manchester City continued their impressive run in the Premier League as they defeated Manchester United 2-1 at Old Trafford on Sunday.

A goal in each half from David Silva and Nicolas Otamendi secured the win for City.

Marcus Rashford scored United’s goal to draw them level late in the first half.

City remain unbeaten after 16 games and have now on 46 points and have gone 11 points ahead of United.

City almost went ahead on 15 minutes following a miscued clearance from a corner by Nemanja Matic but David De Gea saved the goal-bound ball.

City had another good opportunity on 17 minutes after good work by Gabriel Jesus but his weak left shot was easily saved by De Gea.

With 15 minutes remaining in the first half Raheem Sterling was left unmarked but his effort was well blocked by Marcos Rojo.

City’s pressure eventually paid off on 43 minutes thanks to Silva who pounced on a poor clearance by the United defence.

United were back on level terms two minutes into first half added time as Rashford capitalized in Fabian Delph’s mistake to make it 1-1.

Before the start of the second half both teams were forced into early changes as Vincent Kompany and Rojo went off injured and were replaced by Ilkay Gundogan and Victor Lindelof respectively.

City went 2-1 up on 54 minutes through Otamendi who slammed the ball past De Gea after Romelu Lukaku’s clearance from Silva’s set piece came off Lindelof.

City should have extended their lead on 65 minutes but Silva’s dangerous low cross was cleared away.

A minute later Lukaku broke for United only to blast his shot over the bar.

De Gea was called into action on 70 minutes as he stretched to palm De Bruyne’s low shot away for a corner.

United almost capitalised on another mistake by Delph on 76 minutes but Rashford’s shot was punched away for a corner by Ederson.

United had a very big chance to equalise on 85 minutes but Ederson made a double save from Lukaku and substitute Zlatan Ibrahimovic.

Bernardo Silva had the chance to kill off the game from a De Bruyne pass but De Gea made a superb save.