Various reports in England have claimed that Sunday’s Manchester derby ended with a fracas in the Old Trafford tunnel in which United manager Jose Mourinho was reportedly squirted with milk after confronting Manchester City’s players and staff about their over-the-top celebrations.

Manchester City defeated Manchester United 2-1 to extend their lead at the top of the Premier League to 11 points and end the hosts’ 40-game unbeaten run at home. It was also a record 14th straight league win for the visitors.

Police officers and stewards were reportedly forced to intervene in ugly scenes which began with Mourinho telling the victorious visitors to turn their music down and ended with Mikel Arteta, one of City manager Pep Guardiola’s assistants, requiring medical attention for a nasty cut to his face.

According to The Guardian, the violence was sparked when the Manchester United manager became embroiled in an angry war of words with City goalkeeper Ederson.

Mourinho is said to have accused the keeper of time wasting during the match and the pair traded insults in Portuguese before Mourinho, in English, reportedly shouted: “you fucking show respect! Who are you?” 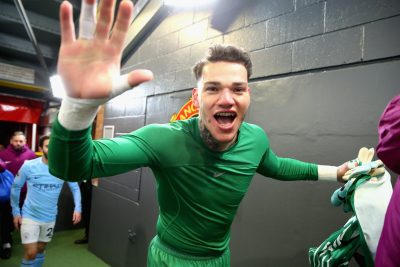 Reports in Daily Mail and The Mirror also claim United striker Romelu Lukaku, who missed a great chance and then contributed to both City goals, was also heavily involved in the fight, which a bystander is said to have compared to a pub brawl as punches and bottles were thrown by both sides.

The hosts are understood to have complained about the provocatively loud noise emanating from the away dressing room and Mourinho’s plea for more respect to be shown to his losing team resulted in him being struck with a plastic bottle and doused in milk.

The situation was eventually brought under control by the police and Mourinho went to referee Michael Oliver’s room to complain about his failure to award United a penalty kick for what he perceived to be a foul on Ander Herrera in the second half.

Arteta’s injury was assessed by City’s medical team and there are unconfirmed reports that another member of Guardiola’s backroom team sustained some sort of injury.

Both United and City have neither confirmed not denied the reports.