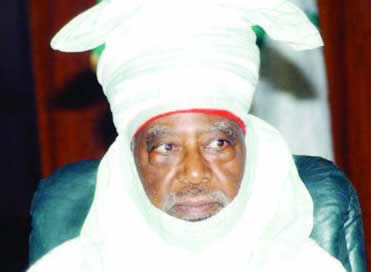 A mistress of Ado Bayero, the late Emir of Kano, Princess Hauwa Momoh, has lamented the alleged abandonment of her children by the deceased monarch’s family.

The 51-year-old, who claimed to be down with fever as she showed our correspondent drugs procured for her by some Good Samaritans in Lagos, also alleged that her life was in danger.

While calling for help from well-meaning Nigerians and the government, she alleged that the family of the late Ado Bayero had warned her not to talk to the press.

Sometime in 1984, Ahmed was said to have handed over his daughter to the emir to be her guardian and assist with her admission into the Bayero University Kano.

Our correspondent learnt that the duo of Hauwa and Ado became close and she became pregnant in 1986 and was delivered of a child.

She said although they were not married, her father gave the union his blessing and she went on to have another child for the emir 15 years later.

Hauwa said the late monarch built a house for her in Gandual Basa, Kano, where she maintained intimate relationship with him for about 32 years until his death in 2014.

She said although the family recognised her children, they treated them with disdain.

She said, “The late emir was a good man who loved me and his children. He treated us well and never allowed us to suffer for once. It was when he died that the problem started. His sons promised to take care of us, but suddenly, they threw us out. We don’t have a home anymore and my children are out of school. We are stranded. It has been very hard for us.”

She alleged that after a reporter with an online medium contacted the family of the late monarch on the plight of her children, the family became uncomfortable.

She said she was in Abuja sometime ago when two policemen, who claimed to have been sent by the family, cautioned her “not to do anything stupid.”

“A few days after that, I was lodged in a hotel in Abuja when some operatives of the Special Anti-Robbery Squad came to look for me. Somebody hid me and that was how they couldn’t find me.

“Since then, I have been moving from one place to another to beg for food and money. I can’t go to Kano again. The house built for me by the emir had been destroyed. The last time I visited, I had to sleep in the open air because people were afraid to take me into their homes.

“The son that is managing the father’s estate did not help us and he does not want me to speak out. He is also blocking people from helping me. SARS men are looking for me, what is my offence?

“I want help for my children because they are out of school. I am alone. The situation is critical now because we can’t even feed. I want Nigerians to help me. I appeal to the good conscience of Aliko Dangote, Bola Tinubu, and the Lagos State Governor, Akinwunmi Ambode, to save me and my children,” she added.

She said she believed that she was being treated with disdain because she was not a northerner, adding that she was disappointed that the sons of the late emir were not protecting his name.

Hauwa claimed that the late Ado Bayero’s deathbed instruction to his sons on her welfare and that of her children, was not being carried out.

One of the children of the monarch, Aminu Bayero, told PUNCH Metro that he was not in the best position to comment on the case.

He referred our correspondent to another member of the family.

“I am not the one handling that issue. We have an elder brother handling it. He can tell you what exactly is going on. Maybe you should get in touch with him,” he said.

The elder member he referred our correspondent to, Sanusi Bayero, said Islamically, it was not the responsibility of the family to take care of Hauwa and her children.

He said, “Is it our responsibility (to take care of them)? No; not Islamically. Why is she saying that we are not doing anything; haven’t we done enough for her? Find out from her (what the family is doing).  She is spending too much money. Everybody helps her, but she has not been grateful.”

The Force Police Public Relations Officer, Jimoh Moshood, did not pick his calls when our correspondent called him for his reaction to the alleged action of SARS operatives.