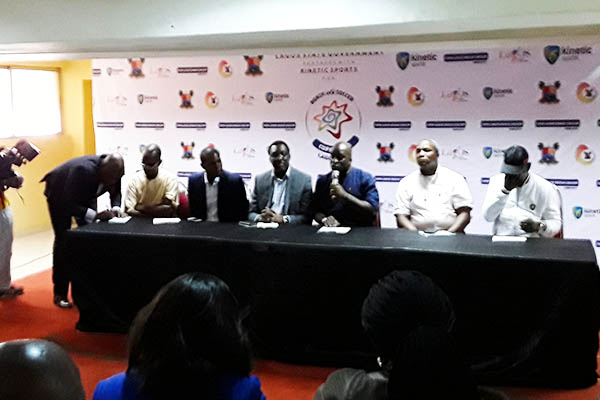 By Nurudeen Obalola: The Lagos State Government is partnering with the organisers of the 2017 COPA Lagos Beach Soccer Tournament to raise the profile of the event, Completesportsnigeria.com reports.

COPA Lagos, an event that combines beach soccer with fashion, music and entertainment, is in its seventh edition this year and it will be held at the Eko Atlantic City from Friday to Sunday.

“Governor Akinwunmi Ambode places a high premium on sports and that is why he is in support of sporting events that bring joy and excitement to the people of the state,” Lagos State Commissioner for Information Steve Ayorinde said during the announcement of the partnership at the Teslim Balogun Stadium, Lagos on Wednesday.
“Lagos State government is driving tourism through arts, entertainment, culture and sports, and Governor Ambode will not allow sports to take a lesser role in his vision for a great Lagos.”

Samson Adamu of Kinetic Sports, the organisers of COPA Lagos, explains the support the event is getting from Lagos State.

“I’m happy Lagos State is partnering with us because COPA Lagos is about sports and entertainment,” Adamu said. “This is the seventh year of the event and we have done something special by forming the Gidi Sharks, a Lagos team of young beach soccer players drawn from all over the state.
“Also for the first time, with the help of Lagos State Government, the Arsenal beach soccer team will be coming to COPA Lagos. This will be their first time in Africa. Lagos State already helped raise the profile of beach soccer as with their assistance, the last Beach Soccer Africa Cup of Nations was the best ever, in terms of standard and attendance.”

Eight teams, four of them national sides, will feature at this year’s COPA Lagos. The national teams are Nigeria, Lebanon, Morocco and Spain. The clubs include Arsenal, Gidi Sharks and the Kebbi team.

The Special Adviser to Lagos State Governor on Sports, Deji Tinubu, promised that Governor Ambode will attend the event, which he describes as one of the end-of-the-year fun activities in the state.