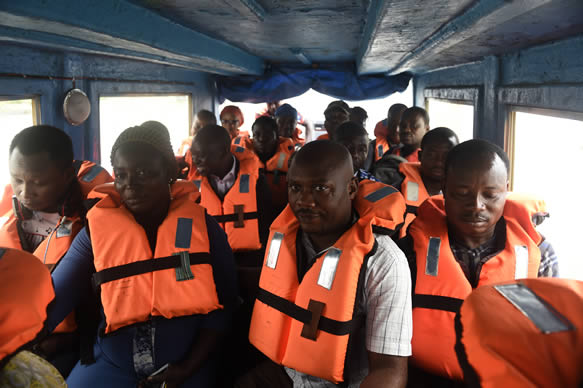 Idris Anjorin believes his life changed in 2009 when he turned up for work – late as usual – distracted and stressed after more than three hours stuck in Lagos traffic.

“I wasn’t happy I came late again. A coworker who noticed my mood advised me to try a boat ride,” the retired banker told AFP.

“The next day, I arrived at Bayeku jetty at 6:00 am and within an hour I had made it to the office. That was a turning point in my life.”

Bayeku is one of several ferry terminals run by private boat operators in the Ikorodu area of Lagos, some 40 kilometres (25 miles) by road to Anjorin’s old office on Victoria Island.

Making a 20-minute boat trip across the lagoon seems an obvious way to avoid the monster traffic jams for which Nigeria’s biggest city and commercial hub is famous.

But for a variety of reasons – from the safety of boats to funding and infrastructure – the sector has not been developed to its full potential.

Now, Lagos state governor Akinwunmi Ambode wants to change that and introduce water taxis as part of an integrated transport system to unclog the city’s roads.

“Twenty-five percent of Lagos is water and it is important that we put in the right initiatives that can actually make activities on our waterways thrive,” Ambode said recently.

The state government said the “grand plan” was “to divert at least two million passengers on the waterways daily, thereby reducing traffic on the road”.

Seven new ferries are set to be bought in the coming months; support will be given to 70 private firms running boat services, and 10 new operators are to be licensed.

Lagosians used to be able to take the ferry from Mile 2, on the mainland, to Marina on Lagos Island in the 1980s and 1990s but no service has run since then.

But with more than 23 million people now living in Lagos state — a figure growing at a rate of nearly four percent a year — it’s clear commuting by water has its advantages.

A worker in Ikorodu, for example, will normally spend three hours in a car to travel to the main business areas of Ikoyi, Victoria Island and Lagos Island.

At Bayeku, passengers file in to buy tickets for the morning commute. All agree that their lives have improved since ditching their cars.

“I now have more time for my family,” said Saheed Ayinla, a project manager who had a long commute to get to his office by 8:00 am until he started using the boat eight years ago.

“I even look healthier. I don’t have to wake up early and return home late. My family is very happy that they always have me around now.

Lola Alawode, a chemical engineer, has been using the boat for the last four years “because it saves time”, but said improvements need to be made, especially on safety.

“The operators do not regularly service and maintain their boats to ensure they are in good condition. This puts passengers at risk,” she said.

Private boat operators blame poor funding, high operating costs and a lack of government support for their inability to develop the sector.

“The cost of maintaining our boats is prohibitive and the government is not doing enough to assist us,” said Justin Ogunbayo, owner of Tango Oscar Marine Service.

Ogunbayo launched his firm in 2012 after 27 years as a merchant ship’s captain. He now has six boats that transport at least 400 passengers every day.

“Three of my boats are now grounded and I don’t have the cash to put them in order,” he said, adding that he has been unable to get bank loans to cover repairs.

The Lagos State Waterways Authority (LASWA), which regulates the sector, said it would soon start dredging the lagoon and creeks to improve safety.

LASWA executive secretary Pekun Falase said routes were being marked out in a similar fashion to the bus-only lanes on the city’s main roads.

He blamed poor maintenance, overcrowding, the use of old life jackets, illegal sand-dredging, wood-logging and abandoned canoes and vessels for accidents.

“LASWA will not hesitate to sanction erring operators who ignore safety standards and put the lives of passengers at risk,” he said.

He said an awareness campaign on passengers wearing life jackets is underway at the jetties.

“This is part of measures to prevent avoidable deaths on our waters.”