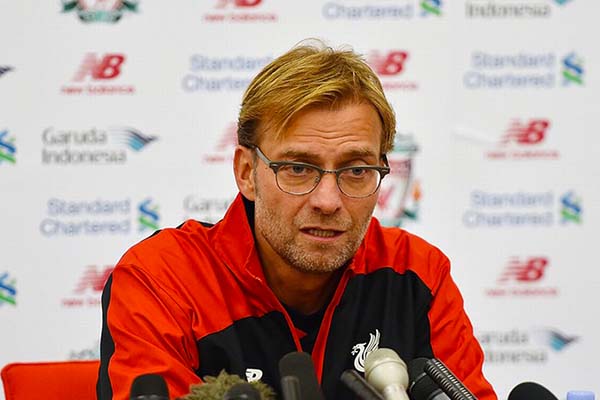 Liverpool manager Jurgen Klopp has admitted that Everton under Sam Allardyce will be difficult to defeat in Sunday’s Merseyside derby at Anfield.

Liverpool have won 22 of the 50 Premier League Merseyside derbies and are unbeaten in their last 13 against Everton, but Klopp has refused to be carried away. He insistex that the Toffees have enough quality in their ranks to cause an upset.

Everton’s last victory at Anfield came 18 years ago and have recorded only two victories in 25 league matches at Anfield.

“No doubt about their quality,” Klopp said during his pre-match press conference on Friday.

“If Everton are not top six it is usually a top seven team. It’s a fantastic club. They have gained confidence and scored the goal of the season with Wayne. Nice one.

“Sam Allardyce is one of the most experienced managers in the League. I’ve only been here two years and have played him in three different clubs.

“You know what you will get but it doesn’t make it easier. All Allardyce teams are difficult to play but we were in a good moment and have to learn from our mistakes.

“I expect good organisation. A clear structure. Some high-level set-pieces. Sigurdsson is born to deliver them. A lot of fight for second balls.

“It’s much more important for what we do. Don’t expect us to play football like in the last 20 mins against Moscow.

“We have to start from the ground and be perfectly organised and protect what we do; be ready for hard challenges. Then we can win the game.”

The Brazilian star had been courted by Barcelona before the close of the summer transfer window.

“I have no reasons to think about it,” Klopp said. “We never spoke about transfers in this moment. Whatever I can say doesn’t stop questions, so I don’t answer.

“Nobody has come to me and said: ‘Phil, he will be away in January’. I’m completely fine with the situation.

“We had this big story in the summer and I have no desire to have it again.

“We have 20 games in this period. On January 31st we can shake hands and say what a wonderful time we had together.”

The German coach also played down the fabulous four tag attached to the his striking quartet of Saido Mane, Coutinho, Mohammed Salah and Roberto Firimino.

“I have no problem with nicknames and you call them Fab Four but that is disrespectful to the other players,” he said. “Just let it be, yeah?”