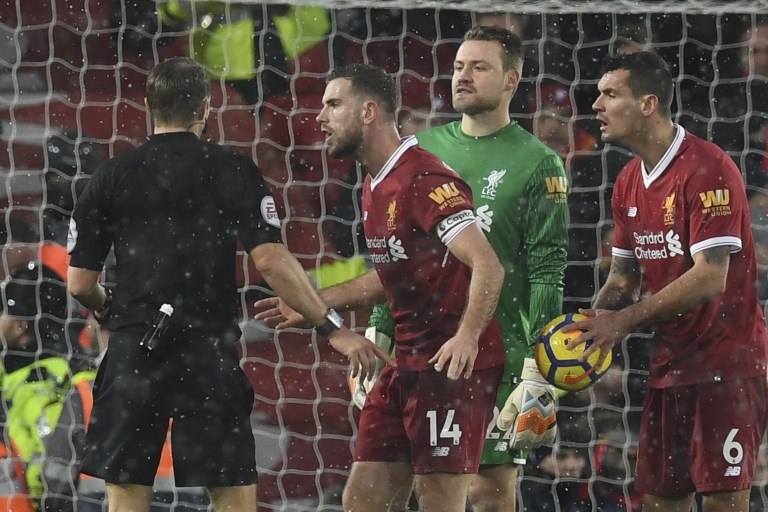 Liverpool manager Jurgen Klopp slammed referee Craig Pawson for the controversial penalty decision that allowed Everton to escape with a 1-1 draw in the Merseyside derby on Sunday.

Klopp was furious that Pawson awarded a 77th-minute spot-kick for Dejan Lovren’s barge into Dominic Calvert-Lewin.

“I don’t understand why the ref is doing that. Lovren doesn’t make a challenge. Calvert-Lewin makes a step. The hand is on the back,” Klopp said in a tetchy television interview.

“If you think it is a penalty say so. Does my opinion change anything?

“I only want to speak to people with a little bit of understanding about football.

“I am sorry, I am wrong and you are right. Obviously I am not in the mood to answer questions.”

Klopp’s surprise decision to rest in-form forwards Philippe Coutinho and Roberto Firmino back-fired, but the German refused to accept any blame, opting to criticise Everton for a defensive display.

“Only one team is trying over 95 minutes to win it. The other team are not in our box and didn’t have a shot on target bar the penalty,” he said.

“Our performance was good. We didn’t score often enough. I saw only one team playing. I can’t believe the situation with all the challenges.

“We were clean and didn’t make any fouls. There is always one nasty one – Sigurdsson made that. A clear red card.”

On his team changes, Klopp added: “Twenty-one days, seven games. We can push them through until one is injured and then people say the squad is not deep enough.

“The players who came on did a brilliant job.”