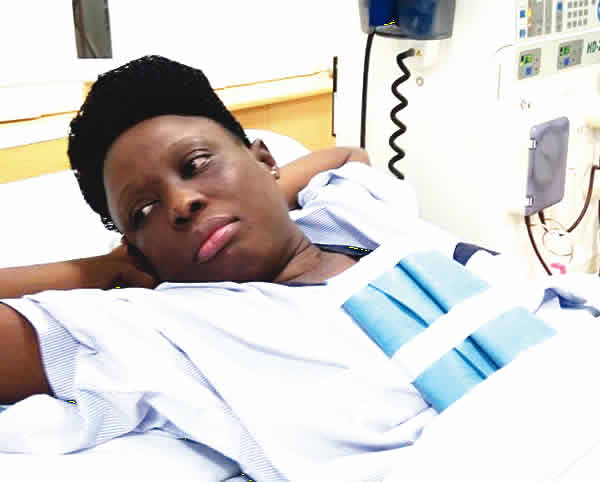 The mother of Tochi, a kidney failure patient, Ndidi Mbonu, has described the allegations against the family by a non-governmental organisation, Dignity for the Helpless Foundation, as unfounded.

Ndidi denied threatening the founder of the NGO, Pastor Samuel Brown, wondering how he could claim to have given her N2m without documentation.

She said Brown’s claims were a cover-up for illegally taking money from the funds donated by Nigerians for her child’s treatment and kidney transplant in India.

Our correspondent had reported that Tochi, a graduate of the Benue State University, became deaf in India after being on dialysis for two years in the country.

She was on dialysis in Nigeria for one year before being flown out in 2015.

Her mother, Ndidi, said she was stranded with her daughter in India due to lack of funds for the kidney transplant, adding that she had resorted to selling beans cake (moin-moin) for survival.

She said her family was introduced to Brown’s NGO in 2015 and an agreement was reached to raise N11m for Tochi’s operation.

She explained that Brown also agreed to open a joint account with the family to ensure accountability.

Tochi’s mother said she was surprised when the NGO opened an account without involving any member of the family.

Ndidi said Brown had only given them N1.4m, adding that he paid N30,000 every two weeks to reach the sum about a year ago.

In a follow up, a former spokesperson for the NGO, Mr. Shallom Ufforth, had said he was a co-signatory to the account before he left the organisation sometime in 2016.

He had alleged that while still in the employ of the group, his boss, Brown, obtained an Automated Teller Machine card on the victim’s account, thereby nullifying his (Ufforth) role as a co-signatory to the account.

Brown had said he got the ATM card after Ufforth resigned his job.

The NGO owner, in a 12-page document, later claimed that Tochi’s mother collected about N3.9m from him, out of which N2m was undocumented.

Ndidi, in her reaction to the allegation, said she had a record of all the funds transferred to her account by Brown, insisting that she had not received beyond N1.4m.

She said, “Before I approached the NGO, I had met with some TV stations and got some money. I was planning to leave for India with my daughter when a friend of mine said the funds I had gathered may not be enough and that I should enlist the help of a good NGO.

“That was how I met with Brown. Another TV station had called me based on a letter I wrote for support when Brown said I could not continue to seek help outside his organisation and I cancelled the appointment with the station to adhere to his rules.

“How will I ask him to send money to anyone when I also needed money? I never asked him to send any money to anybody. I don’t know the person he said he sent money to.  And he claimed he sent N2m to me in bits without documentation, how is that possible?

“When he stopped sending money and I begged him that we were stranded in India, he said I should also try to raise funds over there; that was how I started selling moin-moin to survive. There is no hospital I have not been to in India to seek cheap rates for Tochi’s dialysis. The present hospital we are using gives us free drugs, but we pay for dialysis.”

She said anytime the family called Brown for help, he always gave excuses of either not being available or being in a meeting, adding that at a point, she asked for money to enable the family to travel back to Nigeria.

“He didn’t send more than N1.4m to me. I have the records. It is unfortunate that I have to refute these allegations; what happened to me is a thing of sorrow. I am not after justification, but the survival of my daughter. I believe Brown wants to get the news that my daughter is no more. He made us agree that once she dies, we will not get anything from his organisation,” she added.

Tochi, in a message to our correspondent via WhatsApp, said Brown’s claims had sent her into depression.

She said, “I need Nigerians to help me get back to my feet again. I don’t want to die. Mr. Brown must pay for all his lies and the damage he has done to my health.”