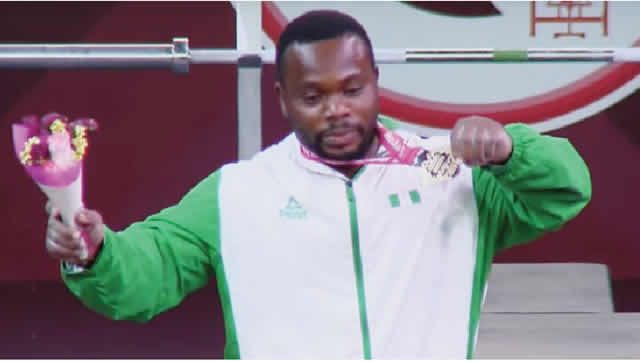 Kehinde, who had set the world record of 220kg in the event at the Rio 2016 Paralympics, broke his own record in the third attempt after cleanly lifting 220.5kg. His first attempt was 210kg while his second attempt was 211.

He however couldn’t extend the world record as he failed to clear his fourth attempt of 224kg.

China’s Liu Lei won silver with a 193kg lift while Algeria won their first medal at the worlds as Bettir Hocine won bronze with a lift of 188kg.

Ezuruike won gold in the men’s +54kg while Orji added silver to the haul in the women’s +86kg.

Ezuruike, who was debuting at the worlds, lifted 180kg in his second attempt after opening with a 175kg lift. He failed to get a clean lift in his third attempt at 184kg.

An excited Ezuruike told paralympic.org that the medal was a surprise because he got injured during the preparations for the competition.

“I am so happy! I had an injury while preparing for the World Championships and did not get here in my best possible form. So this gold medal was an absolute surprise,” he said.