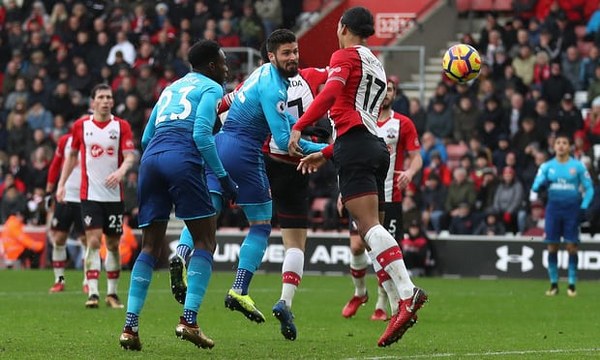 By James Agberebi: Arsenal had to rely on a late goal to force Southampton to a 1-1 draw in Sunday’s Premier League game at St. Mary’s.Super Eagles forward Alex Iwobi was an unused substitute for Arsenal.

The draw lifted Arsenal to fifth on 29 points in the league table.

Southampton went ahead in the third minute through Austin who slotted the ball beyond an on rushing Petr Cech following a mistake from Per Mertesacker.

A minute later Austin had the chance to double Southampton’s lead but could not beat Cech from close range.

Arsenal had their first shot on target in the 16th minute but Alexandre Lacazette’s low shot inside the box was stopped by Fraser Forster.

In the 24th minute they had another chance only for Aaron Ramsey to hit a weak low shot which did not trouble Forster.

Southampton should have gone 2-0 ahead in the 27th minute but Cech did well enough to punch James Ward-Prowe’s curler from a set piece over the bar.

Arsenal had a chance of their own on 32 minutes from Ramsey which drew a brilliant diving save from Forster.

Lacazette should have drawn Arsenal level on 41 minutes but blazed his effort inside the box over the bar.

Southampton almost doubled their lead three minutes into the second half  following a break away but Nathan Redmond’s low shot was well held by Cech.

Oriol Romeu almost scored for Southampton on 62 minutes but his long range shot came off the bar.

Southampton were presented with another chance on 66 minutes only for Redmond to shoot inches wide with Cech to beat.

A minute later, the Gunners responded with their own chance through Nacho Monreal whose curler went wide off target.

Arsenal were awarded a free-kick in a good area on 84 minutes but Alexis Sanchez’s well taken effort was punched away by Forster.

In the 88th minute, Arsenal were back on level terms thanks to Giroud who headed in Sanchez’s cross.

Ramsey should have won it for Arsenal in the last seconds but his weak effort was saved by Forster.