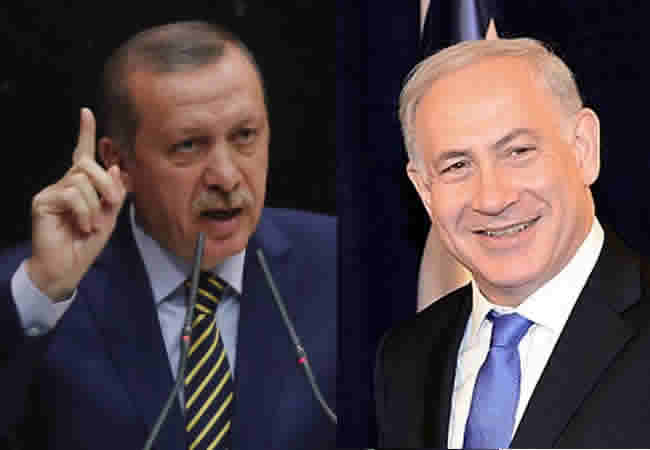 Relations between Israel and Turkey took a bitter turn Sunday as their leaders traded accusations of involvement in terrorism, days after the US recognition of Jerusalem as Israel’s capital.

Turkish President Recep Tayyip Erdogan said he would fight against the controversial declaration, describing Israel as a “terrorist state” that kills children, in a speech in Istanbul.

The two countries had normalised relations in recent years, but Sunday’s flare-up came after Turkey was angered by US President Donald Trump’s decision to recognise Jerusalem as the capital of Israel.

Trump’s move has sparked protests in Muslim and Arab countries for four days.

“Palestine is an innocent victim… As for Israel, it is a terrorist state, yes, terrorist!” Erdogan said in a speech in the central Turkish city of Sivas.

“We will not abandon Jerusalem to the mercy of a state that kills children.”

Erdogan earlier described the status of Jerusalem, whose eastern sector Palestinians see as the capital of their future state, as a “red line” for Muslims.

Netanyahu was quick to counter the assault when he spoke later during a press conference alongside French President Emmanuel Macron.

“I am not used to receiving lectures about morality from a leader who bombs Kurdish villagers in his native Turkey, who jails journalists, who helps Iran go around international sanctions, and who helps terrorists, including in Gaza, kill innocent people,” he said.

“That is not the man who is going to lecture us.”

Erdogan has used his position as the current chairman of the Organisation of Islamic Cooperation (OIC) to call a summit of the pan-Islamic group on Wednesday.

“We will show that applying the measure will not be as easy as that,” he added on Sunday, referring to the IS recognition of Jerusalem.

He said it was “absurd” to deny the Jews’ “ancient connection” to Jerusalem.

During his speech, Erdogan held a picture of what he said was a 14-year-old Palestinian boy from Hebron, in the Occupied West Bank, being dragged away by Israeli soldiers.

Turkey and Israel had improved diplomatic ties in recent years but Erdogan has continued to defend the Palestinian cause and has regularly criticised Israeli policy. (AFP)