Skip to content
‎Completesportsnigeria.com’s JOHNNY EDWARD gets Super Eagles and Hapoel Beer Sheva midfielder, John Ogu talking, about his stint so far with the World Cup bound Gernot Rohr’s team.
Excerpts…
You were an unused substitute in the Super Eagles’ first five games of the World Cup qualifying campaign, but finally got a chance to play in the dead-rubber clash against Algeria which ended 1-1. What went through your mind during those period?
To be honest, nothing went through my mind during those period. I was there trying to stay prepared to give my best whenever the chance comes. I felt like that at some point, but the joy is that everyone was doing well and we were winning games. I’m happy that at the end of it all we qualified and I got a chance to play against Algeria. As a team, we played better. We were in control and coming out with a 1-1 draw was great. We were just out to do the country proud and I’m glad that it turned out well.
Did you lose faith in the system, especially with a self belief that you possess the quality to start games as well?
Hmmm no. There wasn’t a time I lost faith in the system because of the qualitiies of players starting the games.  Also my relationship with the manager gave me more confidence before I got my chance which was very key. I was just excited to be called up to the team and the fact that we qualified for the World Cup in Russia seamlessly. We achieved qualification without struggling a bit unlike in the past when we had so many difficulties.  So for me, that was something to cheer about, rather than sulk on the bench.
The current Super Eagles managed to stay unbeaten during the World Cup qualifying campaign. Just how good is this team judging from how you all played against Argentina, in which you  were a beast in the midfield?
The win against Argentina says a lot about the Eagles and we won’t rest on our oars going into the World Cup. We  have been together and we keep reminding ourselves we are here for a reason.  Kudos to the coaches, the NFF and the fans who supported us all the way.
First of all, the unity in the team has been key as we reach out for one another. Fighting for ourselves made us stronger too. The Super Eagles qualifying for Russia 2018 without losing was no fluke, and we showed that in the friendly against Argentina despite the fact that we were without five key players and the Argentine team paraded top quality players as well, regardless of Lionel Messi, Gonzalo Higuian and Mauro Icardi missing the game.
You have played in different formations at club level. How difficult or easy was it playing in a 3-5-2 formation with the Super Eagles against Argentina?
It wasn’t difficult playing in the 3-5-2 formation, but the fact that the Super Eagles had one training session saw the team struggle in the first half. But we picked up in the second half and showed the class we were made off.  Scoring four goals against an Argentine star-studded side isn’t a fluke at all. We worked it out with our bond.
Would you prefer the Super Eagles maintain this 3-5-2 formation when the missing players return, or rivert  to the old 4-2-3-1?
That is for the manager to decide. I’m just in the team to carry out his match-day plan. 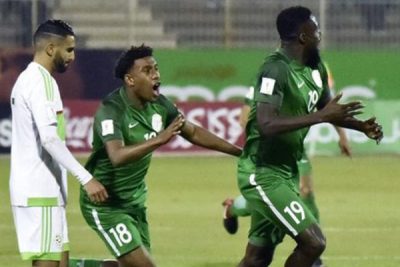 Nigeria has faced Argentina more than any other team at the World Cup. Are you comfortable facing the La Albiceleste again in Russia, with the likes of Lionel Messi and Mauro Icardi in the squad?
There are no easy teams all the teams that have qualified will be tough. We have to prepare for a game as it comes. It’s the World Cup and not a friendly, so other factors will come to play. It’s going to be Nigeria vs Argentina and not Lionel Messi vs Nigeria. As a team, we have the quality to break them down again even with the inclusion of Messi. They have had it smooth in the past, but it’s time to end that jinx against Argentina in Russia.
How far do you think the Super Eagles  can go in Russia?
It’s not going to be easy. We will be out there to win games and play quality football. We have the talent and quality to go far.
Watching the World Cup as a growing kid, tell us your best memory as a fan?
Watching the world Cup as a fan was the game involving Nigeria and Spain in France 1998.  We won 3-2, I remember the goal Sunday Oliseh scored won us the game. That team showed determination and great strength which is what we are also imbibing. We will go far in Russia.