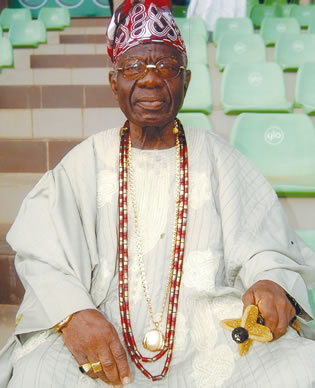 Eighty-four-year-old lawyer, Adebisi Osibogun, shares the story of his life with TOLUWANI ENIOLA

Tell us about yourself.

I was born on December 31, 1932, in Ijebu Ode, Ogun State. I am the sixth of the 27th children of my father. My father was the late Chief Josiah Osibogun who was a descendant of Onafowokan Otubu in Ijebu Ode. Osibogun means a war returnee; a soldier who has returned from war. In 1892 precisely, the British opened internal territories for trade. This was initially met with resistance from the locals.

My grandfather, Onafowokan Otubu, was a leader of the warriors sent to confront the British expeditionary forces in the popular Imagbon war of 1892. The British gained entrance and opened up the place for trade and other missionary works. Of course, many of us benefited from missionary duties, including my father.

As a young man, my father’s uncle granted him the chance to be trained by the British. He later became a headmaster and also a proprietor of a school. He was among the first set of Ijebu to establish a school in Lagos in those days. He was also a foundation student at Ijebu Ode Grammar School in 1913.

When did you come to Lagos?

Tell us your childhood memories.

My father had many wives. It was fun growing up in such a large household. He had a house in Lagos as well. It was only the first wife who lived with him in Lagos at the time in the early 30s. My mother was the second wife. As a young man, I shuttled between Lagos and Ijebu Ode.

Although ours was a large family, life was not difficult because our father had the means to fend for the family. He was not quite rich but the communal lifestyle was good. My mother and other wives worked on the farm. Some of his wives were also teachers like him. So, they were not much of a burden to him.

I remember that every year, we travelled from Lagos to celebrate the yuletide in Ijebu Ode. All the family members usually came to celebrate Christmas and the New Year together. Then, we usually left Lagos from Idumagbo by boat to Ikorodu.  From Ikorodu to Ijebu Ode, we travelled by road. There was always much to eat during the festivities. I really enjoyed that period of my life.

What kind of person were your parents?

My father was a disciplinarian. When we were in school, children were rascally. If one was among those who disobeyed the school rules, if he gave other children two strokes of the cane, the disobedient ones would get four or six strokes of the cane. He would say, “You are supposed to know opportunity means responsibility.” It was later in life that we appreciated him for not indulging us.

My mother, the late Felicia Osibogun, was from a royal family, a direct descendant of Awujale Oba Ademolu of the Anikilaya ruling house.

Why did you study law?

I was an average student in secondary school. But I was one of the academically popular students. We had what I call ‘subject rivalry’ in those days. My forte was History, Geography and Literature. I was good at Literature. Law was not my choice although I liked the profession.

After leaving secondary school in 1951, I was employed by the then Bank of British West Africa as a clerk. I later travelled to the United Kingdom. I was admitted into the North-Western Polytechnic, London for A-Level.

I gained admission thereafter to the University of Hull, Yorkshire, England and graduated with a B.Sc in Economics in June 1959. Then my father insisted that I should study law again after Economics. I did and got an LL.B at the same university. When he said that, I obeyed him. It’s not like now that children reject their parents’ wishes. Since he was ready to pay for my education, I said it was fine. It was not so expensive to study abroad then. In terms of exchange rate then, there was little difference.

How was life in London?

The cultural differences and climate shocked me. I had to wear many clothes to battle the cold.  Most of the Britons I met them had not seen a black man before. So, because I am dark in complexion, they usually stared at me. I remember that a Briton once accosted me and asked, “What have you come here to do?”  I smiled and said, “I have come to study.”  It was all fun. There were Nigerian foods brought regularly from Lagos. I usually visited the Nigerian markets to buy things.

The weather was the most challenging aspect of my life abroad. As a student, I needed to supplement my income. I usually went to some farms to help some farmers harvest potatoes and earn token wages. I enjoyed working on the farms. I spent over six years in London.

What did you do when you returned home?

After returning from the UK, I attended the Nigerian Law School and qualified as a Barrister and Solicitor of the Supreme Court of Nigeria in October 1965. I was sent to the Federal Ministry of Trade and later became the head of the Domestic Trade Division. In 1975, I attended the prestigious Royal Institute of Public Administration, London. I was employed by the Federal Civil Service Commission immediately on merit. Employment was not a problem then. The civil service was orderly. I call it our pride.

What did people tease you about when you were in the civil service?

I received many reactions when I introduced myself as an Ijebu man to people. When I told a man I came from Ijebu, he said, “You are Ijebu and you still went to study economics again with your thrifty background?” I laughed.  I think being thrifty is a good attribute.  A thrifty nature is good. I am sorry to use this example. During the unfortunate civil war, we didn’t borrow a penny from anywhere. That would be ascribed to Awolowo, who was a minister of finance at the time. He was not flamboyant. He used the commonwealth to develop our people. That is why he has a good name. I am always proud to be an Ijebu. I am proud of that. There are rogues in Ijebu just as there are good people too. An Ijebu man knows how to keep things and manage resources effectively.

How did you meet your wife?

I didn’t know my wife was from Ijebu Ode. I met her in Lagos when I was just 19. She was a teenager then. When I completed secondary school in 1951, I used to see her quite often. Each morning, when I was going to work, she used to follow same direction to school.

Our paths crossed many times. Gradually, I got to know she was from Ijebu Ode.  We got married in 1958. I was 26 years old at the time. God blessed the union with two children, a girl and a boy. We wanted more but we are grateful to God for them.

What are your regrets about Nigeria?

I have no regrets being a Nigerian. Nigeria is an aggregate of various loving and beautiful cultures. Nigeria started quite well. We had leaders who had the necessary qualities to change the country. We had a fairly good government with individuals like Nnamdi Azikiwe, Obafemi Awolowo, Ahmadu Bello etc. When you have good leadership, it will definitely reflect on the quality of the followership. It is unfortunate things have degenerated in Nigeria.

Why didn’t you join politics?

I was not brought up to like politics. I was taught to say the truth all the time. I don’t know how to pretend or be deceptive. I am not the type that will have an agreement with someone and then turn around do the opposite. My father was a disciplinarian and the way he brought us up was quite different.

What’s your most memorable moment?

An important day of my life was a time I had a challenge in the civil service. Some people were trying to frustrate me. They asked us all to step aside for an investigation to be carried out. After the investigation, it was discovered that I was innocent.  When my father heard the verdict, he said, “Congratulations. You are truly my son.”

Another day I will never forget was the day I got married. I was married for more than five decades. But my wife is dead now. I was with her when she passed on.  I thank God for her life. The Bible says if you do well, you will go to heaven and if you do bad, you will go to hell. That is straightforward.

Hell and heaven mean different things to different people. Some people begin to experience hell from earth because of their evil deeds. I thank God my wife led a purposeful life and supported me. Fifty-five years of marriage is not a joke. Despite the challenges, it’s unforgettable. I feel the absence every time. I miss her a lot.

What do you do these days?

I have a few friends that I still meet with. I am an Otunba in my town and I have to attend council meetings. My schedule is to wake up in the morning, read the papers and go for check up. I also manage my schedule well so I don’t stress myself because of old age. As an Ijebu man, I don’t borrow money so I am not indebted to anybody. I have peace of mind. Taking care of my health is like a daily job to me.  I go for a checkup almost every day.

Do you still pray for more years on earth?

What is your advice to Nigerian youths?

They should be focused in life. They should concentrate on whatever they have determined to do. They should set a realistic course and focus on that. Understand your background well and make the right decisions. Make sure your springboard is strong and not made of sand. Perseverance pays. Tenacity of purpose is key to succeeding in life.