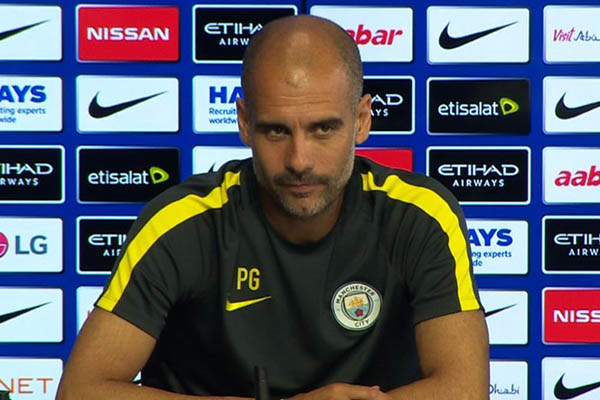 Silva was the hero for City as he scored the winning goal on 83 minutes in their 2-1 comeback win against West Ham United in the Premier League at the Etihad on Sunday.

But speaking in Tuesday’s press conference ahead of City’s Group F Champions League away clash against Shakhtar Donetsk, Guardiola expressed hope that the Spaniard recovers in time for the derby.

“Kevin is suspended tomorrow and Silva has a little problem – I don’t know whether he will recover for Sunday,” Guardiola said.

“He felt uncomfortable after his goal. He felt something. Hopefully he can play on Sunday.”

City have already sealed top spot after winning all their five games and are on 15 points.

But Guardiola who won the Champions League twice with Barceloan (2009 and 2011) admitted that City’s impressive run in this season’s competition is not a guarantee they will win it.

“We are playing well but it does not mean we will go on to win the competition … The most important thing is that last month we were OK. We believe in what we can do,” he added.

On the game against Shakhtar being his 100th Champions League game, the former Bayern Munich head coach said:”It’s a nice number, it’s a lot of games in a marvellous competition. Hopefully I can enjoy this for even longer.”

He also went on to state that he does not see his City side going unbeaten for long.