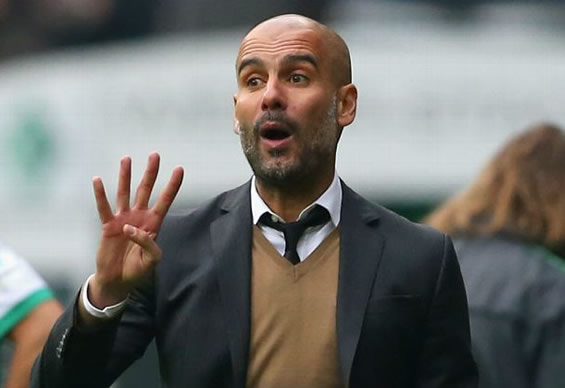 Pep Guardiola says he is delighted with the performances of his young players despite Manchester City suffering their first defeat of the season, ESPNFC reports.

City were beaten 2-1 by Shakhtar Donetsk in Ukraine although they were already assured of a place in the last 16 as top seeds after winning their opening five matches.

The City boss made seven changes from the team that beat West Ham United in the Premier League on Sunday, including a full debut for 17-year-old Phil Foden, who became the youngest ever Englishman to start a Champions League game.

British-born Nigerian Adarabioyo, 20,  was solid  in the defence  while  18-year-old Brahim Diaz hit the post shortly after he came off the bench.

“Congratulations to Shakhtar, it was a good game,” Guardiola told BT Sport. “Their first goal was magnificent, and the second goal we didn’t defend that well.

“We fought and I’m so pleased for Tosin, Phil and Brahim and how well they played against a good team like Shahktar Donetsk.

“The people saw it, we came here to win and we were there until the end. We couldn’t do it but I’m happy for the performance.”

It was the first defeat for City in 29 matches in a run stretching back 227 days and also brought an end to a 20-game club-record winning streak.

City fell behind to first-half goals from Bernard and Ismaily before substitute Sergio Aguero pulled a goal back from the penalty spot in injury time.

Holders Real Madrid are among the teams they could play in the last 16 along with Bayern Munich, Juventus, Sevilla, Porto or Basel.

“In the Champions League on Monday we are going to talk about the draw,” Guardiola added.

“It’s how they arrive in the moment on that day. Maybe in February we will be a disaster. It won’t be easy.”

City now turn their attention to Sunday’s crucial Manchester derby in which a victory against United would extend their lead at the top of the Premier League to 11 points.