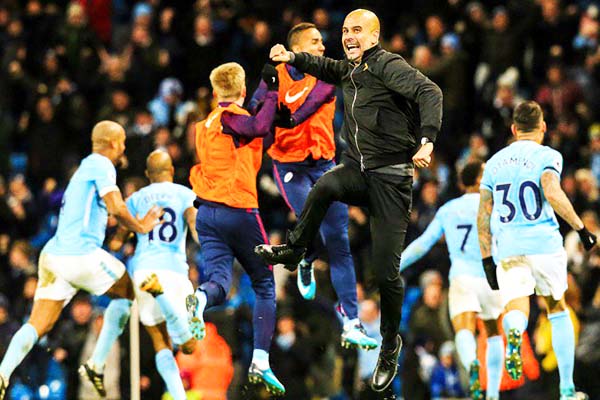 Manchester City manager Pep Guardiola has admitted that his side struggled to find their rhythm in Sunday’s nervy 2-1 win over West Ham at the Ethiad Stadium.

Guardiola guided City to their 13th win in a row and return to an eight-point cushion in the English Premier League table ahead of second placed Manchester United whom they face next Sunday at Old Trafford.

Goals from Nicolas Otamendi and David Silva made sure Angelo Ogbonna’s 45th minute opener counted for nothing.

“We started really well but we lost our patience. We didn’t have any rhythm because (West Ham keeper) Adrian was taking 30 seconds every time,” Guardiola said during his post-match interview.

“It was similar to the last few games, in the second half I thought we would score. It was massive. They played 10 players inside the box, it was almost impossible. It’s a big victory. It showed what we are.

“You have to try to solve it [when teams pack the defence]. We had two strikers in the second half and that helped, it was a big lesson for me. We created more with two.

“The pace was better, we had more presence in the box. Kevin de Bruyne playing as the holding midfielder gave us the tempo. We were much, much better.

“We spoke a lot about defending set-pieces but they are taller. It will happen again next week against United so we have to try and concede fewer set-pieces.”

Guardiola also revealed that his team lost their patience in their search for an equaliser.

He added: “Today was different to (the late winner against) Southampton – I did not think that was going to happen. But today since after five minutes in the second half I felt we were going to score. Our pace and pass were quicker and better, that is why we are so happy – every game is so tough and it is important to keep our momentum.

“We started well but lost our patience and couldn’t find the players in position, they moved too much.

“But you have ups and downs – what is important is that in the second half it was outstanding the way we played. It means we have done 39 points in a row. That is a lot. You see how they run and how they fight, that’s why we are so proud again.

“Before (next week’s match against Manchester United) we have to travel to Ukraine and after think about Old Trafford. We are going to try to be who we are.”