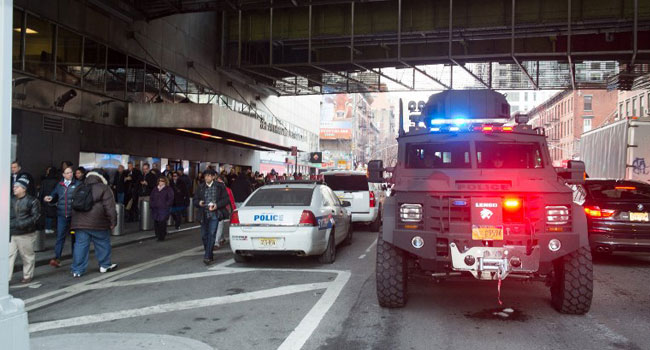 Four people were injured Monday in the blast that rocked a subway station in the heart of Manhattan, in what the city’s mayor said was an “attempted terrorist attack.”

The blast — which took place in the station at the Port Authority bus terminal, not far from New York’s iconic Times Square — sparked commuter panic and travel disruptions.

The bomb rattled a city still scarred by the devastating September 11 attacks, and a truck attack in October that left eight dead on a bike path.

A man suspected of being behind the blast was in custody, and suffered injuries, police said. None of the other injuries were life-threatening.

“This is New York. The reality is that we are a target by many who would like to make a statement against democracy, against freedom,” New York Governor Andrew Cuomo told reporters.

“This was an attempted terrorist attack,” Mayor Bill de Blasio added. “Thank god the perpetrator did not achieve his ultimate goals.”

New York police commissioner James O’Neill said the 27-year-old suspect had strapped the explosive device to his body. He suffered burns to the hands and abdomen, and other injuries.

Photos were circulating on social media of the man on the ground with his hands cuffed behind his mask and injuries to his torso.

Former New York police chief Bill Bratton told MSNBC television that he had been told the suspect was originally from Bangladesh and may have been acting in the name of the Islamic State group.

Police quickly evacuated the Port Authority station and closed roads in the area, which were filled with police cars and ambulances with flashing lights.

The blast occurred at the peak of the morning rush hour, shortly before 8:00 am (1300 GMT), when large numbers of people were headed to work.

On Halloween, a truck attack in lower Manhattan killed eight people and injured 12. It was the first deadly terror attack in New York since 9/11.

New York is on high alert ahead of the holidays, which culminate every year with the giant New Year’s Eve celebration in Times Square, attended by hundreds of thousands of revelers.

“We have the Statue of Liberty in our harbor, and that makes us an international target. We understand that,” Cuomo said.