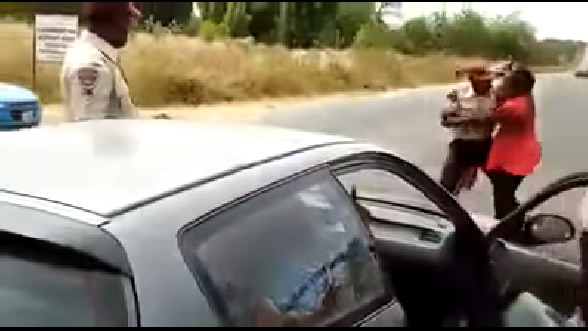 The Federal Road Safety Corps has explained what really went down in a recent viral video showing its official fighting a woman in public.

The management of the FRSC said the incident occurred along Jalingo-Wukari route in Taraba state.

A team of uniformed FRSC officers had been captured in the video trying to hold one of the officers off from fighting a woman appearing to be the driver of the hatchback Toyota Corolla 2002 model.

The woman dressed in a red top and blue denim trousers could be seen briefly hitting one of the officers with a shoe while the officer swiftly replied with cross jabs that almost missed the woman.

The video ended after another woman emerged from the vehicle and slapped the officer after discussing with him for some seconds.

In a statement signed by the corps Public Enlightenment officer, Bisi Kazeem, revealed that according to a preliminary investigation into the matter, the affected patrol team involved was from Taraba State Sector Command.

“In the course of its patrol along the route, a female driver was sighted driving without wearing a seat belt, upon which she was stopped for consolidation of the offence by a member of the patrol team,” Kazeem said in the statement.

He narrated further that in the process, the alleged offender flared up on the grounds that she was on seat belt; shouting and insulting the arresting marshal, who got provoked and retaliated verbally to the altercation.

“In the ensuing arguments, a passenger, who was also identified as mother to the offending driver, not only prompted her to physically attack the arresting marshal using her shoe, but joined in the attack, while the marshal fought back, though not in our character as an organisation that is very civil and disciplined,” Kazeem added.

It was added in the statement that a full investigation into the matter has been ordered to determine the background, the cause and culprits of the unfortunate incident.

He said the affected officer has also been ordered to appear before the Federal Road Safety Corps Disciplinary Panel at Zone 3 Headquarters Yola, Adamawa State to face charges of fighting and conduct unbecoming of Officers and gentlemen of the Corps.

“FRSC Management regrets the embarrassment caused by the ugly incident to members of the public and strategic stakeholders of the Corps whose supports have led to the high-level disciplinary standards the Corps has been known for over the years,” Kazeem concluded in the statement.